Protesting resident doctors have called for total shutdown of medical services in Delhi hospitals after the police action against them on Monday afternoon. 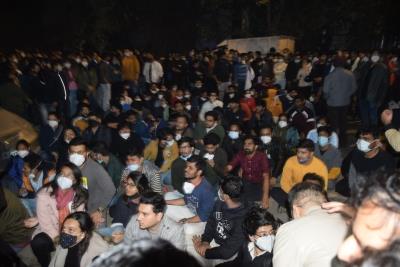 Protesting resident doctors have called for total shutdown of medical services in Delhi hospitals after the police action against them on Monday afternoon.
The resident doctors, who have been protesting against delay in PG NEET counselling, were marching towards the Supreme Court when they were stopped by the police near ITO in the afternoon, and claimed that over a thousand of them were detained by the police.
Calling it a "black day" in the history of the medical fraternity, the Federation of Resident Doctors' Association (FORDA) said: "There will be a complete shutdown of all healthcare institutions today onwards. We strongly condemn this brutality and demand immediate release of our FORDA representatives and resident doctors."
"A Black Day in the history of Medical fraternity of the nation. Resident Doctors, the so called 'Corona Warriors', protesting peacefully to Expedite NEET PG Counselling 2021 in Delhi were brutally thrashed, dragged & detained by the cops. The medical fraternity of the nation must condemn this act in strongest words & come forward in support. We urge all State RDAs of the nation to join the agitation! We all stand united in this fight against injustice," the statement said.
Talking to IANS, RML Hospital RDA Vice President, Dr Ajay Kumar, said that over a thousand doctors have been detained by Delhi Police, and they want an apology "for such barbaric action".
Meanwhile, protesting doctors gathered at the Safdarjung Hospital in late evening to march towards the residence of Union Health Minister Mansukh Mandaviya to protest. However, they were stopped on the way and taken to Sarojini Nagar Police Station.
RML Hospital RDA General Secretary Dr Survesh Pandey told IANS that they were detained at the Sarojini Nagar Police Station while on the way to the Health Minister's residence but released in the late night.