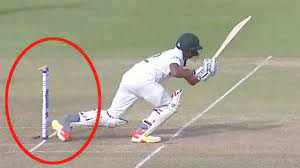 The IPL is still going on in India, but in Sri Lanka, a Test series is being played between Bangladesh and the Sri Lankan team.

The second Test match between Sri Lanka and Bangladesh was marred by an unexpected incident.

In reality, Bangladeshi batsman Taijul Islam was oddly hit wicket out during the first innings of this Test match.

On social media, a video of Taizul Islam being a hit wicket has gone viral. On a short ball from Sri Lankan bowler Suranga Lakmal, Bangladeshi batsman Taijul Islam tried to defend by going to the backfoot, but his shoe opened to the stumps and he was run out. This is a once-in-a-lifetime event in cricket. The batsman was baffled by what had happened to him.

This video is going viral on social media, and people are having a lot of fun with it.

Sri Lanka has set a target of 436 runs for Bangladesh to win the second Test. After taking a 242 run lead in the first innings, Sri Lanka declared their second innings after scoring 194 runs for 9 wickets.