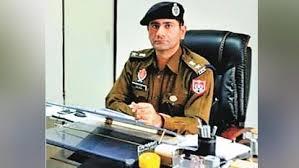 In a major breakthrough in the operation against the gangsters, the district SAS Nagar Police has been sucessful in arresting the two active members of the Lawrence Bishnoi gang and recovered arms & ammunition alongwith vehicle from them.
Disclosing this in a press communique Mr. Vivek Sheel Soni, IPS, S.S.P. S.A.S. Nagar said that Mohali police has launched a special operation against active gangsters and during this drive Police got a major breakthrough when they arrested active gangsters of Lawrence Bishnoi and Canada based handler Satwinder Singh alias Goldy Brar groups. Manpreet Singh alias Manna son of Sukhmander Singh, who is operating Bishnoi group across Punjab, and his close associate Gurpreet Singh son of Gurtej Singh a resident of nearby Dana Mandi Bhikhi, District Mansa were arrested last night and recovered two pistols alongwith live cartridges and a white colour Tata Safari from his possession.
Briefing about the police action, SSP Mohali said that on 04.04.2022 Mohali police received technical and manual input that Lawrence Bishnoi's and Satwinder Singh alias Goldy Brar's associate in jail Manpreet Singh Manna son of Sukhmandar Singh resident of Talwandi Sabo is operating his gang across the Punjab from Bathinda, with their associates setting up bases in Tricity area.  Manpreet Singh alias Manna was brought in on production warrant under case number 90/2021 u/s 25 Arms Act, PS Sadar Kurali and interrogated in depth during police remand. He gave information about future criminal activities of their group. He also told that Goldy Brar of Canada provided them with three pistols, one of 30 bore, one of 32 bore and one of 315 bore from near Gurugram. He further gave information of targets of Goldy Brar and Lawrence Bishnoi group.
Mr.. Soni further said that on the basis of inputs and information provided by Manpreet Singh, the police carried out a thorough investigation and on 06.04.2022 on the basis of inputs against this gang a case No. 74/2022 u/s 25 Sub Sections 7, 8 of Arms Act, PS Sadar Kharar was registered and arrested Gurpreet Singh son of Gurtej Singh resident of Dana Mandi, Bhikhi, Mansa, a close associate of Manpreet Singh Manna of Lawrence Bisnoi group, during a blockade near Jalvayu Tower in a white Tata safari number PB10 CD0705.  Police recovered 7.62MM (32 Bore) alongwith 06 live cartridge and 315 bore pistol alongwith 02 live cartridges from him.  The investigation also revealed that Gurpreet Singh was in different jails of Punjab from 2014 to 2020 in a murder case number 116, dated 28.11.2014, u/s 302, 427, 148, 149 IPC, PS Bhikhi Mansa. During his tenure in jails he comes in connections with different gangsters of Lawrence Bishnoi groups. He is being further questioned in depth.  The police is hoping for more important disclosures.