Six minor girls were set to be forced into child marriage by their parents in Pushkar, Rajasthan

Today Six minor girls were set to be forced into child marriage by their parents in Pushkar, Rajasthan. But thanks to the efforts of a 24-year-old Jaira Sona Chin, who lives 6,370 km away, these weddings were stopped. Jaira, who frequents Pushkar, says she wants these girls from Rajasthan's Nat community to attend school and stand on their feet, while their parents had planned to marry them off.

Jaira, who is from Holland, is a student of International Development Studies on South and South-East Asia and has been visiting Rajasthan for several years. In fact, since 2016, she has visited the state 16 times. In Rajasthan, Jaira works with local NGOs and is trying to ensure children are given opportunities to attend school. She is reportedly sponsoring the education of nearly 40 students in Pushkar. Speaking to one of the news organization, Jaira said her friends in Pushkar told her that six minor girls were likely to be forced into marriage by their parents today. Learning this, she contacted Child Rights and You (CRY), an NGO working for child rights in India. CRY in turn approached a local NGO in Pushkar - the Women's Public Rights Committee, which reported the matter to the local police.

Acting on the information, police carried out searches on Sunday and found the information to be true. They have been regularly monitoring the girls' family members to see if they are trying to secretly marry them off.

Jaira first visited Rajasthan in 2016 with her mother and also visited Pushkar. She says there she saw two minor boys from the Nat community begging on the streets. She went to their homes and found that the family's economic condition was very weak. She says their house did not have any water facility nor did they have anything to eat. 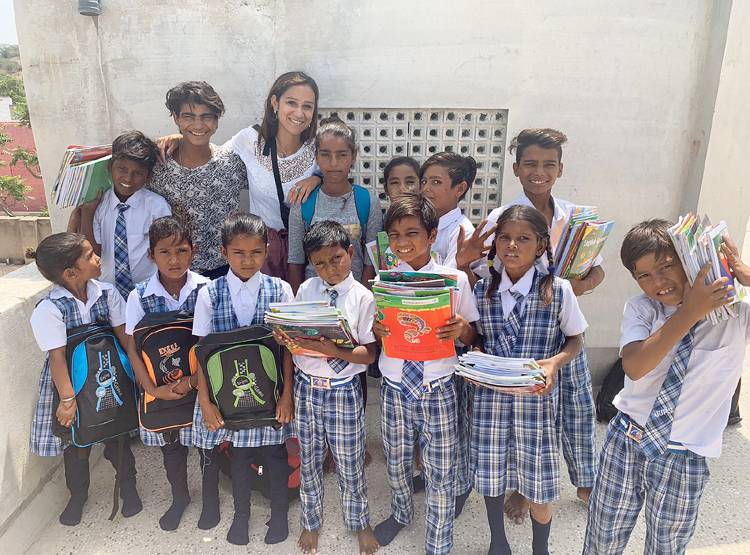 Also Read: Husband of 5 cons 50 women on terms of job promise in Bhopal

She returned to Pushkar a month later from Amsterdam, Holland, to see how she could help children in Pushkar. Jaira says during her stay she learnt that most people from the Nat community make a living by either begging or doing odd jobs. Neither the parents nor their children have any schooling.

She approached the management of a local school - Jawahar Public School - and convinced them to enrol 40 children from the Nat community.

Giriraj Gujariya, principal of Jawahar Public School, said Jaira bears the expenses for the tuition fees, food and uniforms of these 40 students. He said, thanks to Jaira, the students are also receiving extra tuition. "Teachers and staff of my school take care and ensure that the education of these children is not disturbed. Jaira will be visiting us soon and we will visit the families of the six girls who were about to be married off and convince them to allow them to study."

It was Giriraj Gujariya who altered Jaira that an 11-year-old girl has not been attending school for nearly a month. He told her that her sibling has also stopped coming to school.

When they inquired further, they found that besides these girls, four others are about to be married between October 16 and 18 in Nasirabad, near NH-89, ahead of Ajmer.

Jaira also has an Indian connection in her family. Her maternal grandfather was from Bihar. His family later moved to Suriname.