5 Hindi Web Series or Movies to watch on OTT in April 2022, Know How to enjoy all Entertainment

With the starting of a new month, April, where we will witness lots of fun, drama and entertainment. As in this month which is going to bring a lot of new things to OTT in terms of entertainment. 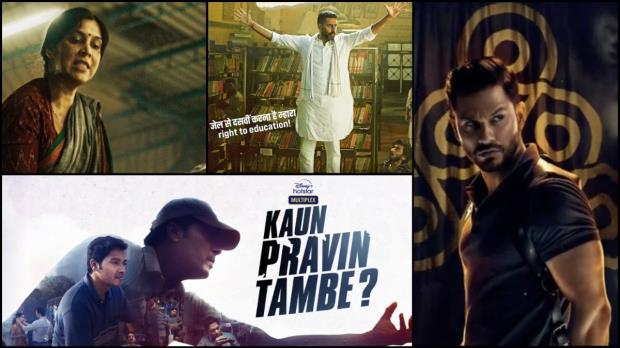 With the starting of a new month, April, where we will witness lots of fun, drama and entertainment. As in this month which is going to bring a lot of new things to OTT in terms of entertainment.
For you, we have given information about the films and web series releasing this month in this article.
This list includes popular OTT platforms like NETFLIX, DISNEY+ HOTSTAR and AMAZON PRIME VIDEO.

Even though movies have started hitting theatres, the OTT platform remains the hub of entertainment for binge-watchers.
This is the reason that with the new month like the new week, a long list of films and web series released on OTT comes out.
Today, through this article, we will give you information about the films and web series to be released not only this week but also in the coming weeks.
Also Read: OTT platforms signal demise of formulaic storytelling: Pratiksha Rao of Netflix
RADHE SHYAM

Release date - April 1 Amazon Prime Video
South's superstar and Bahubali actor Prabhas starrer film 'Radhe Shyam' was released in theatres on 11 March.
However, the film did not get any special response on theatrical release, after which now the film has finally been released on OTT.  'Radhe Shyam' has been released on Amazon Prime Video today on 1 April.
It is a romantic drama film. If you love watching movies of this genre, then you can enjoy this weekend with your loved ones.
KAUN PRAVIN TAMBE

Release date - April 1 Disney+ Hotstar
Kaun Pravin Tambe film has been released today on Disney+ Hotstar on 1st April. The film is a biopic of cricketer Pravin Tambe, who started his cricket career at the age of 41 with IPL.
If you are an IPL or cricket lover, then you will definitely like this movie. Shreyas Talpade is playing the lead role in this film.
DASVI

Release Date- 7 April Netflix India
If you look at next week's list, the tenth film will be released on Netflix India on 7 April. In this film, Abhishek Bachchan is playing the role of a Jat leader who gets imprisoned for corruption.
Failed eighth from jail, Chaudhary decides to pass the 10th exam.
ABHAY (SEASON 3)

Release date- 7th April Zee5
If you love watching crime thriller movies and series, then the third season of Abhay is releasing for you on Zee5 on the 8th of April.
Actor Kunal Khemu is playing the role of a policeman in this series.  If you haven't watched its two seasons yet, then hurry up this weekend for its first and second season... so that you can enjoy the third season to the fullest.

Release date- 15 April Netflix India
Sakshi Tanwar starrer suspense-crime-thriller web series Mai will be released on April 15. You can watch it on Netflix India.
In this series, you will see a mother avenging her daughter's murder.  Sakshi Tanwar, who plays the character of a simple daughter-in-law in the TV serial, will be seen in a different form in this series.