#55DaysToPathaan: Makers drop new poster as the countdown for the SRK-led action-thriller begins

Shahrukh Khan is marking its return on the big screen with this action-packed movie set for its theatrical release on January 23rd, 2023 Author : Tushar Singh 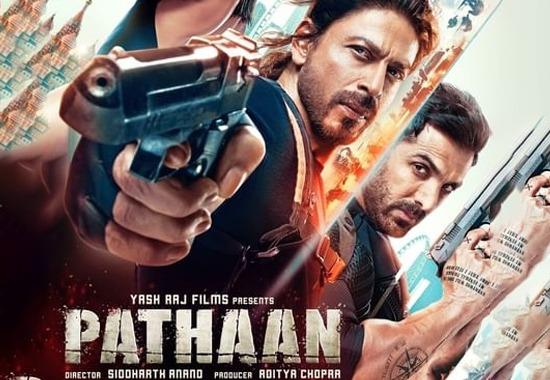 Even with nearly two months to go for Shahrukh Khan’s action thriller Pathaan the zeal and hype among casts, makers, and fans are surmounting like anything.

As December sets in to set the tone of zeal and enthusiasm ahead with the movie the makers have released a new poster of the movie with a trend #55DaysToPathaan which has taken over the fans.

Apart from a stunning star cast this movie is even special in terms of Bollywood Badshah Shahrukh Khan who is marking his return after a long on the big screen.

The most anticipated action thriller of Bollywood Badshah, Shahrukh Khan is all set to hit the big screen on the 25th of January 2023. The film has created a lot of buzzes which will mark the return of Shahrukh Khan after a long gap.

Pathan OTT Release Date: When & where to watch star-studded action thriller on the web space

As per the information on the plot available, the movie will be typical police versus crime story. Although among new twists the story will come up in a dystopian setting, which is done in the middle east.

The film will proceed in the form of a struggle between Shahrukh Khan and John Abraham who will be featured as a big drug lord, a merciless gangster who killed his own father to establish his supremacy in the world of crime, and SRK is after him in the hunt.

Although the film’s OTT release makers are yet to come up with an official release date under any circumstance, the movie won’t be coming up before the March end or the beginning of April, and regarding the digital streaming rights of the film, reports suggest that the global OTT giant Amazon has reserved it for a whopping 200 crores.