“Boeing has cleared Air India to operate to USA on B777,” the airline said in a statement.

Air India on Thursday resumes six India-US flights after getting clearance from the plane manufacturers.
“Boeing has cleared Air India to operate to USA on B777,” the airline said in a statement.
According to the officials, Air India cancelled six flights to US considering the intervention of frequencies with the altimeter radars that gauge how far above the ground an airplane is. Around six flights namely: Delhi-Chicago, Chicago-Delhi, Delhi-San Francisco, San-Francisco, Delhi-Newark, and Newark- Delhi were put off till further notice. 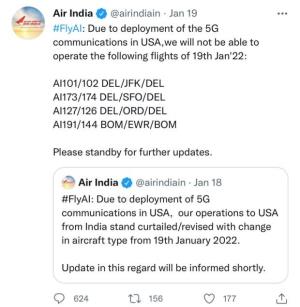 Reason for cancellation of flights:
Radar Altimeters operate in the 4.2-4.4 GHz frequency range which is comparable to the one issued for telecom operators, that is, 3.7-3.98 GHz on the spectrum range, also known as C-band.
US Federal Aviation Administration had issued a warning that the new 5G service may potentially interfere with the frequency range issued for radar altimeters.
Usage of C-Band has become a cause of concern around the world and has invited the necessary halt. Aviation regulatory bodies are worried over coincidence of frequencies which may lead to disturbed readings.
Mobile phone carriers like ATT and Verizon have postponed the launch of the 5-G service near some US airports.
The higher frequencies are associated with the better services in the telecom sector. On the other hand, altimeters of flights need to operate at higher frequencies to get the best possible reading. Clash of the two has lead to a row which needs to be resolved by both parties.
As the issues were resolved, the flights have resumed.
Also read: Air India curtails US operations due to 5G roll-out
Why flights were not cancelled in any other region?
In other regions such as the European Union, it is not a cause of concern for they operate in the 3.4-3.8 GHz range. South Korea operates within 3.42-3.7 GHz. These are significantly lower than the ones used by altimeters in the aviation industry.