The six-day old "economic blockade", called by the All-Tribal Student Union Manipur (ATSUM), along the National Highway-2 (Imphal-Dimapur), was "temporarily suspended" on Wednesday night and movement of goods-laden stranded vehicles began, both the agitating organisations and officials said. 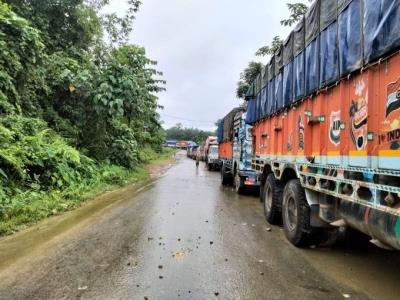 The six-day old "economic blockade", called by the All-Tribal Student Union Manipur (ATSUM), along the National Highway-2 (Imphal-Dimapur), was "temporarily suspended" on Wednesday night and movement of goods-laden stranded vehicles began, both the agitating organisations and officials said.

After holding an emergency meeting with federating units of the apex tribal students' body on Wednesday, ATSUM General Secretary S.R. Andrea announced that the union decided to suspend the economic blockade.

"While reaffirming the position of the ATSUM on the ADC Bill 2021, and considering the plight of the general public with regard to the ongoing economic blockade, the ATSUM has decided to temporarily suspend the ongoing economic blockade along the National Highways of the state with immediate effect," Andrea told IANS over phone on late Wednesday night.

"We have resolved to further continue the agitation by other forms of democratic means. The Union also appeals to all to continue supporting the movement for securing the future of the tribal populace."

Manipur government officials also said that the ATSUM, which called the "economic blockade" on Friday, demanding the Manipur (Hill Areas) Autonomous District Council (Amendment) Bill, 2021 be moved in the Assembly to provide more administrative powers and autonomy to the tribal bodies, have suspended their road blockade on Wednesday.

Due to the blockade, hundreds of goods-laden vehicles were stranded since Friday along the National Highway-2, which connects Manipur with the rest of the country by road, via Nagaland.

The security forces escorted 510 goods-laden vehicles to move to their destinations on Monday afternoon but after that, over 700 more trucks and other vehicles carrying essentials and other goods were stranded in the vital national highway as the tribal students' body continued their blockade till Wednesday afternoon.

The Manipur government, after holding marathon meetings on Sunday and Monday, had signed an agreement with the agitating ATSUM leaders on Monday.

Soon after the signing of the deal, the government released all five arrested ATSUM leaders, who were arrested on August 2 and sent to 15-day judicial custody by the Chief Judicial Magistrate, Imphal West.

According to the agreement, signed by Manipur government represented by Tribal Affairs Minister Letpao Haokip, and Hill Areas Committee (HAC) Chairman Dinganglung Gangmmei and three student leaders, the 7th Amendment Bill of Manipur Hill Areas District Councils for devolution of power of Autonomous District Councils was referred to the HAC it would have held consultations with all the stakeholders before recommending it to the Manipur Assembly.

However, the top ATSUM leaders did not accept the agreement saying that those who signed the deal did not consult the executive committee of the organisation and they signed the agreement on their individual capacity.

The ATSUM had suspended Vanlanlian Khaute from the post of Vice President of ATSUM with immediate effect for gross violation of the conduct of the Union by unilaterally appending signature to the agreement.

In view of the road blockade and apprehending deterioration of ethnic troubles, the Manipur government had suspended the mobile data (internet) services for five days in the entire state on Saturday but on Tuesday, restored it.

The BJP government headed by Chief Minister N. Biren Singh introduced the Manipur (Hill Areas) District Council 6th and 7th amendment bills in the Assembly last week. However, the ATSUM claimed that these bills are not in line with their demands.

The ATSUM has been agitating in the hill districts including Kangpokpi and Senapati for quite some time, demanding more power to the tribal autonomous district councils.

In August last year, the Hill Area Committee (HAC), comprising MLAs of all the 20 tribal reserved seats of Manipur, had recommended the new Autonomous District Council (ADC) Bill to ensure 'equitable development' in the hill districts in the same parameters as in the valley region of the state.