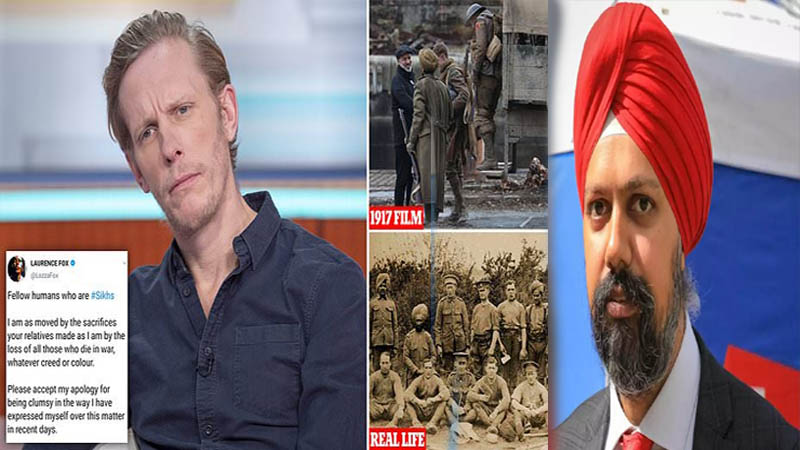 Actor Laurence Fox has raised a controversy by claiming that the war film is "institutionally racist" for portraying a Sikh Soldier in the First World War trenches.

Sikh MP Tan Dhesi while hitting back at the actor says, "ignorance is said to be the privilege of the clueless. However, I was ­incensed by the ­posturing Laurence Fox, proving that empty vessels really do make most noise."

The shoot-from-the-lip actor sounds a real bigot with the stupid assertion that Sam Mendes’ Oscar-nominated war epic 1917 is “institutionally racist” and “forcing diversity” because it includes a turbaned Sikh soldier in the trenches.

Also Read: US: Sikhs to be counted as separate ethnic group, census to take place

Having studied for my MPhil in History, let me give Fox a British history lesson. The twig of a distinguished family – who ranted on Question Time last week that to call him a “white privileged male” was racist – he is either forgetting what he was (hopefully) taught at Harrow School, or his parents wasted a small fortune sending him there.

I, proud to be the first turbaned Sikh elected to sit in the House of Commons, as Labour MP for Slough in Berkshire, will take no lessons in patriotism or military service from an actor affected by prejudice. My grandfather’s brother, my grandmother’s brother and another family member all fought voluntarily for Great Britain. One lost a leg. We know the price of freedom, including a defence of freedom of expression.

Here are a few facts for floundering Fox to learn before – if he’s a man of honour – issuing an unqualified apology.

More than 1.5 million people from what is modern-day India, Pakistan and Bangladesh rallied to the cause and took up arms in what was the largest volunteer army in history.

Sikhs, famed around the globe for their military tradition, made up only 2% of the population of British India – yet they formed 20% of the British Indian Army during the First World War.

More than 83,000 turbaned Sikh soldiers laid down their lives and more than 100,000 were injured during the First and Second World Wars. The acts of bravery were exceptional – Victoria and Military Crosses were won. Sikhs lived and died on the Western Front, just like troops born in Slough and Sunderland, Stirling and Swansea.

Their blood was spilled too at Gallipoli and on the Somme. Their families too received the telegrams informing them a beloved husband, son and brother would never return home. Their bodies too were lost to the end of time, blown to smithereens by German shells or landmines.

These facts might be inconvenient for Fox’s distorted view, but they are verifiable facts, as photographs from the conflict testify. It is why a motion I tabled in the last Parliament, which “appreciates the extraordinary bravery and sacrifice of Sikh soldiers in service of Great Britain, including during both World Wars”, was signed by 260-plus MPs from all parties – a record for that parliamentary session – including Labour leader Jeremy Corbyn, the Father of the House and leaders of all opposition parties.

I fear for the safety of anybody standing near Fox when he discovers our campaign for a war memorial in central London to turbaned Sikh soldiers has succeeded. Plans for a statue in a very prominent place are to be unveiled shortly.

In Gravesend, Kent, thanks to a community campaign I led, there is already a statue to Squadron Leader Mahinder Singh Pujji DFC. He was a turbaned Sikh Hurricane pilot, who took on Hitler’s Luftwaffe and survived several crashes.

I applaud Sam Mendes for making a start by including at least one Sikh on the Western Front when in our arts and culture, and particularly our war movies, there is a noticeable lack of black and brown faces. Fox is guilty of inciting a poisonous culture war on steroids, imitating the toxic tactics of Donald Trump. Whitewashing history is a crime against the truth; divisive tactics betraying the fair play and decency of the overwhelming majority of our country who appreciate a rich tapestry.

Telling the truth about Sikhs and others in the military, including Muslims, Hindus and Black soldiers from the Caribbean and Africa, is to pay tribute to that past, to shape the present and future.

We should value our country’s history and challenge a noisy ignorance fuelling the rise of a violent Far Right, not least the Neo-Nazis who would have been on the side of our enemies – sympathising and supporting Hitler in the darkest hours. Narrow nationalism is exposed as ugly hate in a cloak of deception.

I promote integration and community cohesion, celebrating all who serve our country, regardless of background, colour or creed.

So should a Fox, who needs to educate himself, accept he’s wrong, get off a high horse and start talking sense for a change.