This whole matter is related to a newspaper named National Herald, which has been a newspaper since before independence. The publication of this newspaper was with a company named Associated Journals Limited. 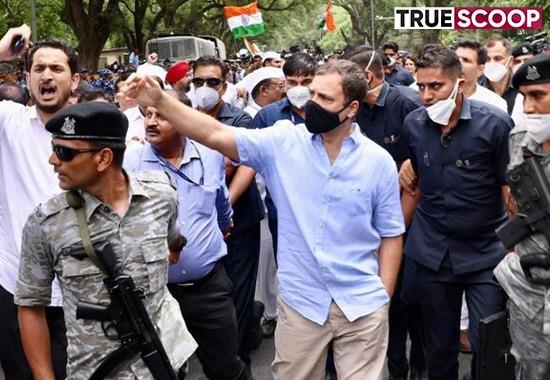 The National Herald Case is once again in discussion in the country. The reason for the discussion is the summons sent by the Enforcement Directorate ( ED ) to Congress leaders Sonia Gandhi and Rahul Gandhi. In this summon, he has been asked to appear before the ED.
Since Sonia Gandhi is battling COVID-19 and was admitted to the hospital, Congress has given notice of Rahul Gandhi's appearance as a show of strength. Congress has accused the Center of the appearance of Rahul Gandhi in the National Herald case. Congress leaders say that the Modi government is troubling the senior leaders of the party, but we will not bow down. All the leaders will protest from the party headquarters 24 Akbar Road and will go to the ED's office and protest.
These are the questions being asked by Rahul Gandhi:
- What was your position in AJL?
- What is your role in Young India?
- Why are there shares in your name?
- Have you ever had a meeting with the shareholders before, if not, why?
- Why did Congress give loans to Young India?
- Why did Congress want to revive the National Herald?
- Can you give information about the loan given by Congress?
- Can you give details about the properties of AJL and the National Herald?
- Why Congress party failing to provide hint on case
What is the National Herald case?
This whole matter is related to a newspaper named National Herald, which has been a newspaper since before independence. The publication of this newspaper was with a company named Associated Journals Limited. This newspaper was started in 1938 by the first Prime Minister of the country, Jawaharlal Nehru. Apart from these, about 5 thousand freedom fighters were also its shareholders. Apart from this, two more daily newspapers were brought out. The name of the Hindi newspaper was Navjeevan and the name of the Urdu language newspaper was Qaumi Awaaz.
Through this newspaper, freedom fighters used to raise their voices vigorously, and thus were disliked by the British. In this way gradually this newspaper became the mouthpiece of the freedom fighters. This newspaper, which severely reviews and criticizes the works of the British government, became the eyes of the British. As a result, in 1942, the British banned the National Herald newspaper.
Also Read: After 3-hour questioning, Rahul Gandhi leaves ED office
Became a means to take the policies of Congress to the public
The National Herald was revived in 1945. After the independence in 1947, Jawaharlal Nehru resigned from the post of board chairman of the newspaper. After this, the newspaper was published continuously and became a means of conveying the policies of Congress to the public.
The real problem starts from here
In 1962-63, 0.3365 acres of land was allotted to Associated Journals Limited (AJL) at 5-A Bahadur Shah Zafar Marg of Delhi-Mathura Road Road. While allotting the land, a condition was laid that the building to be built on this land would not be constructed for any other purpose. In the year 2008, when the UPA government of Congress was in power, once again the publication of this newspaper was stopped. The reason given was that the company is at loss, so this decision has been taken.
In 2011, the holding of this loss-making company was transferred to Young India Limited. Young India Limited (YIL) is a company started in the year 2010. Rahul Gandhi was the General Secretary of Congress at that time and he also became the director of this company.
Its highest 38-38 per cent shares were in the name of Rahul Gandhi and Sonia Gandhi. The other 24 per cent shareholders included Congress leader Motilal Vora, Oscar Fernandez, journalist Suman Dubey, and Congress leader Sam Pitroda.
The biggest turning point in this whole matter came in 2012 when BJP leader Subramanian Swamy filed a complaint in the lower court making allegations. There was fraud and breach of trust in the acquisition of Associated Journals Limited by Young India Limited, he said. Some Congress leaders were also involved in this fraud.
That's why the name of Sonia-Rahul is ahead in the whole matter.
It is alleged that the Gandhi family acquired AJL by using Congress party funds and tried to encroach on the assets of this company worth 2000 crores.
Swamy wrote in the complaint that Young India took over properties of AJL located in Delhi-NCR, Lucknow, Mumbai and other cities. Subramanian Swamy accused Sonia Gandhi and Rahul Gandhi of acquiring property through deceit. He said the loan given to AJL is illegal as it was given out of party funds.
Congress said Swamy's complaint was motivated by political malice
After Swamy's allegations, Congress put forth its stand. The party said that the matter is motivated by political malice. Due to the poor financial condition of the publishing company AJL, Congress tried to save it only because the party wanted to save the legacy. There has been no transfer or change in respect of the entire property. However, after these many times, there was a verbal war between BJP and Congress.
ED's entry in 2014
To investigate whether money laundering has taken place in this entire case, ED's entry was made in this entire case in 2014. Know what happened when...
June 2014: Court summons Sonia and Rahul as accused.
September 2015: ED starts investigation in this case.
December 2015: Sonia Gandhi and Rahul Gandhi appeared in Patiala court in this case and got bail. The hearing continued and the Supreme Court refused to stay the hearing.
October 2018: Delhi High Court orders AJL to vacate Herald House on Bahadur Shah Zafar Marg. Which said that the building was being used for commercial purposes.
February 2019: The Gandhi family reached the Delhi High Court against this decision.
April 2019: Supreme Court stays this order of the Delhi High Court.