The charity organization, that is known for their works across the world and whose headquarters in Punjab are in Patiala termed the NIA notices as "indiscriminate." 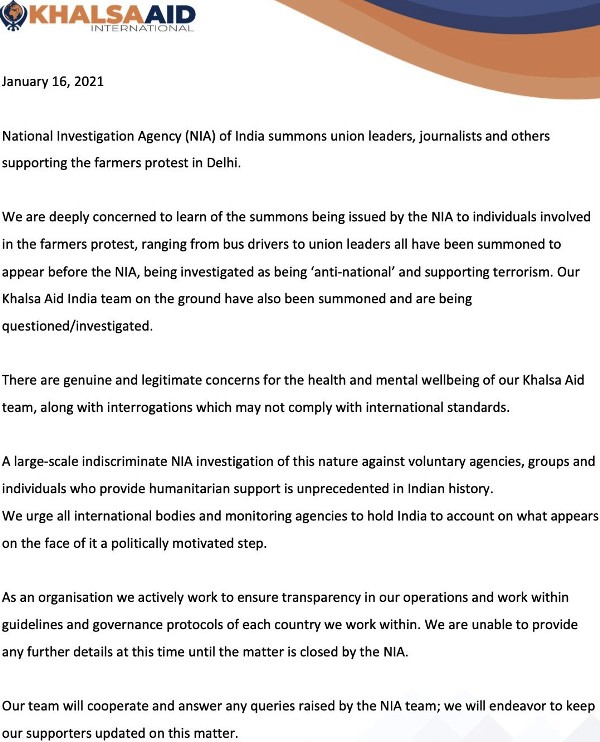 Linked to farmers protest and a charity organization, 'Khalsa Aid' trustee, their director in India and around 40 other people have received letters from National Investigation Agency (NIA).

Among the 40 people summoned by National Investigation Agency, farmer's leader Baldev Singh Sirsa and Punjabi actor Deep Sidhu have also been called for questioning on January 17 in a case related to 'Sikhs for Justice' (SFJ).

These people have been summoned for examination as witnesses in a case related to Sikhs for Justice (SFJ) under Section 160 CRPC (Code of Criminal Procedure).

Khalsa Aid has issued a statement concerning the NIA notices. In the statement, they mentioned, " We are deeply concerned to learn of the summons being issued by the NIA to individuals involved in the farmers protest, ranging from bus drivers to union leaders all have been summoned to appear before the NIA, being investigated as being ‘anti-national’ and supporting terrorism. Our Khalsa Aid India team on the ground have also been summoned and are being questioned/investigated."

Further the statement added, " There are genuine and legitimate concerns for the health and mental wellbeing of our Khalsa Aid team, along with interrogations which may not comply with international standards."

Urging the international organizations, Khalsa Aid mentioned in the statement, " We urge all international bodies and monitoring agencies to hold India to account on what appears on the face of it a politically motivated step."

The charity organization, that is known for their works across the world and whose headquarters in Punjab are in Patiala termed the NIA notices as "indiscriminate."

The statement said, " A large-scale indiscriminate NIA investigation of this nature against voluntary agencies, groups and individuals who provide humanitarian support is unprecedented in Indian history."

However, in the end of the statement, the Khalsa Aid team promised to co-operate with the central agency. Farmers' unions and leaders are of the view that such notices are being sent to dismantle the protests against farmer laws.