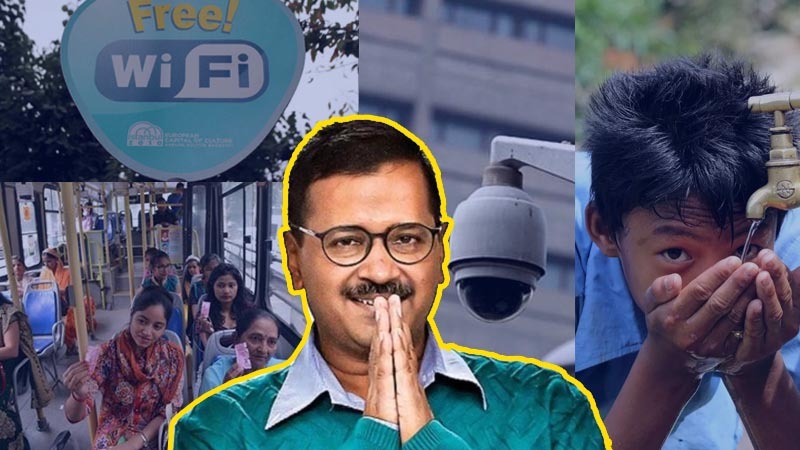 Delhi election results are almost out and Arvind Kejriwal is all set to take oath for the third time as Chief Minister of Delhi. This win of Arvind Kejriwal and his party is of great importance as he and his party was termed as 'Anti-Nationalist' and even terrorist. Every time the Bharatiya Janata Party tried to circle Delhi CM on the basis of not fulfiling his own promises, every time Kejriwal came in front with facts and proofs.

So Let's have a look on the 'Aam' agenda of Aam Aadmi Party that defeated BJP:

AAP's campaign from the start was based on the plethora of promises fulfilled by their government. However Union Home Minister and BJP leader Amit Shah tweetd against such promises and tried to take a jibe by saying that he had been unable to access the free Wi-Fi offered by the Delhi government despite searching so extensively that his phone ran out of battery.

AAP soon came up with a cheeky reply and tweeted "Sir... we have also arranged free battery-charging along with free Wi-Fi," Arvind Kejriwal tweeted, with a pointed reminder that the Home Minister needn't pay for the electricity because his government had also offered Delhi citizens free power up to 200 units.

Amit Shah and Arvind Kejriwal locked horns on the promises and claims made by AAP on the installation of 1.2 lakh CCTV cameras in 1,041 government-run schools. Yet again, Amit Shah accused AAP of  "fooling the public" by installing only a few cameras.

After that the Aam Aadami Party came up with a CCTV Footage of Amit Shah's visit to government's school in Delhi, nullifying the claims made by Shah. Arvind Kejriwal said, "I'm glad you saw 'some' CCTV cameras. A few days ago you said 'don't install a single camera'. Now let us show you the schools too?" the Chief Minister hit back, adding, "I am happy that the people of Delhi have changed the politics... so the BJP has to ask for votes on CCTV and schools".

Arvind Kejriwal also accused that free electricity, water and bus rides will be stopped if BJP comes to power

Amit Shah during a rally outlined the water prob of Delhi and also promised clean drinking water to every house. Yet, again Arvind Kejriwal came up with facts that before their second term only 53 per cent of Delhi were getting water via taps, the remaining use to get from water tanks. But in a term of five years 93 per cent people are now getting water via tap.

Also Read: Man spotted holding 'Modi Vs Kejriwal 2024' poster in Delhi. Is this what going to happen?

Having failed to circle AAP on development issues, the BJP then picked up the agenda of 'Tukde Tukde Gang' and Shaheen Bagh Protests. During a rally Amit Shah urged Delhi voters to vote with such force that the current is felt in Shaheen Bagh. Even Arvind Kejriwal was called a terrorist by the Information and Broadcasting Minister Prakash Javedakar during a press conference.

Arvind Kejriwal then came in front and challenged to arrest him if they have proof that he is a terrorist.

Standing on the verge of winning the Delhi elections, Kejriwal is now seen as the face who will lock horns in the 2024 Lok Sabha elections.