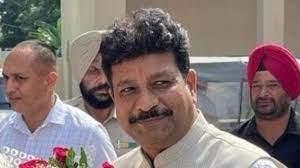 In a scuffle between Jalandhar Central MLA Raman Arora and Jalandhar's DCP Naresh Dogra, two days ago few people were injured. At the same time, some of Sheetal Angural's supporters also got hurt and Sheetal Angural's younger brother Rajan Angural reached the civil hospital with them. There are allegations against his supporters for demanding wrong MLR and misbehaving with the medical staff of the Civil hospital. Regarding this, today Jalandhar's civil hospital staff demonstrated a sit inside the hospital.

Because of this, the MLA of Jalandhar Central, Raman Arora reached the hospital and apologized to the medical staff and he assured them that tomorrow Sheetal's brother Rajan Angural will also come and apologize.

Jalandhar Central MLA Raman Arora said that whatever happened yesterday is condemnable and he had apologized to the medical staff and tomorrow Sheetal's younger brother Rajan will also come and apologize to them. He also said that he will compensate for the damage caused in the civil hospital.

Civil Hospital doctor, Harmeen Kaur said that the incident of that day is morally abhorrent, for which the MLA of Jalandhar Central, Raman Arora apologized and he said that he will compensate for the damage done in the civil hospital. He will assure the safety of the hospital so that what happened yesterday can never happen now.

The medical superintendent of the hospital said that whatever happened yesterday was wrong, for which Raman Arora apologized and the strike announced by the doctors yesterday was also canceled.