With less than 10 days left for the Municipal Corporation of Delhi (MCD) polls, the Aam Aadmi Party (AAP) is trying to gain mileage for the civic body elections from the issue of non-inclusion of Delhi Deputy Chief Minister Manish Sisodia's name in the first chargesheet filed by the Central Bureau of Investigation (CBI) in connection with the Excise Policy scam. Author : Rakesh Behal 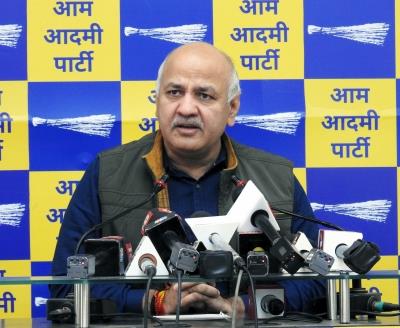 With less than 10 days left for the Municipal Corporation of Delhi (MCD) polls, the Aam Aadmi Party (AAP) is trying to gain mileage for the civic body elections from the issue of non-inclusion of Delhi Deputy Chief Minister Manish Sisodia's name in the first chargesheet filed by the Central Bureau of Investigation (CBI) in connection with the Excise Policy scam.

The opposition Bharatiya Janata Party (BJP) had claimed many times that the alleged irregularities and the entire scam pertaining to the Excise Policy evolved around Manish Sisodia. However, the chargesheet filed by the CBI did not mention even his name.

An AAP source said "it is like a certificate of honesty for the party, and now the people will give it verdict on this in the December 4 MCD polls".

"The chargesheet even does not find the mention of Manish Sisodia's name who was earlier framed as number one accused," the source said.

AAP's Delhi state convener Gopal Rai said the Central government and the BJP leadership from the last six months were saying that there is enough evidence against Sisodia.

"But despite all this, Sisodia's name in the chargesheet was not even included as there is no evidence. It was a conspiracy to defame Sisodia and the party ahead of MCD and Gujarat elections.

"In March, when the MCD elections were due, the BJP was in a position where they would lose badly, so they got it delayed on the pretext of a merger of the MCD. A few months later, as Arvind Kejriwal got involved in campaigning in Gujarat and the party was getting a lot of support there, BJP started this campaign to defame Manish Sisodia to divert attention and defame AAP," he said.

After the CBI filed its chargesheet on Friday, the AAP leaders addressed the media underlining the party's honesty. They also targetted the BJP for fabricating stories to defame the party.

AAP leader Atishi said in a briefing "the BJP was fooling the entire country for the last six months to defame AAP and the Arvind Kejriwal-led Delhi government".

In another briefing, AAP leader Saurabh Bhardwaj said the BJP should tender an apology to Delhi's students and their parents for targetting Sisodia.

Meanwhile, Manish Sisodia went on to demand an apology from the Prime Minister over the controversy and sought the removal of the Delhi L-G and Chief Secretary from their posts.

Delhi CM Kejriwal in a tweet said: "Manish Sisodia's name is not even in the ED's chargesheet. Should not PM Narendra Modi apologise to the country for implicating Sisodia in a false case, who made India's name in the world through education revolution? Will the country progress by putting those who do good work in jail?"

"Now, the people have to decide whether they want 10 work of Arvind Kejriwal or 10 videos of BJP. The public will decide in MCD elections on December 4," he said on Saturday.

Even as the party is stressing on the issue of excluding Sisodia's name in the CBI chargesheet, the civic body poll seems to evolve around two issues -- three 'garbage mountains', and the much talked-about AAP's 'honesty'.