Reportedly, Abhishek Bachchan has been suffering from a hand injury and has been admitted to Lilavati hospital. 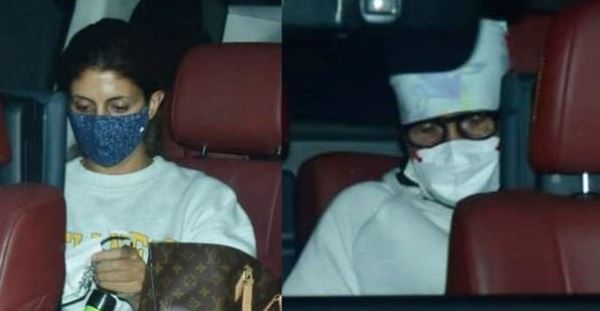 On the occasion of Raksha Bandhan, Amithan Bachchan with his daughter Shweta was spotted outside the Lilavati Hospital. Reportedly, the father-daughter duo visited Abhishek Bachchan who has been suffering from a hand injury. However, this report has not been confirmed by the actor or the hospital staff.

Big B of Bollywood was spotted in a white tee and white trouser and Abhishek Bachchan was seen with a hand sling tied on the right hand, however, it is not yet clear how, when, and where Abhishek Bachchan got hurt. Abhishek’s health status is still unknown.

Many photos of Amitabh and Shweta outside the hospital are now becoming viral on social media. Here are some of the pictures clicked by Bollywood paparazzi named Viral Briyani.

On Rakhi, Abhishek wished his sister and other cousins with a cute video and wrote, “Sisters, happy Rakhi. Love you all.” Whereas, Shweta shared two adorable pictures with brother Abhishek and wrote, “Either plotting or posing. My KINDRED. Happy रक्षाबंधन @bachchan.”

In terms of work, Abhishek Bachchan has been seen in movies like Big bull, LoC: Kargil, Players, and Dhoom 3. His upcoming projects include Bob Biswas and Dasvi.

Amitabh Bachchan would be seen Chehre with Emraan Hashmi, Brahmastra with Nagarjuna, Ranbir Kapoor and Alia Bhatt, Mayday with Ajay Devgn and Jhund.