Actor Siddharth retweeted a tweet from badminton player Saina Nehwal about Prime Minister Narendra Modi's security failure. In a tweet, he referred to Saina as a "subtle cock champion," which angered the netizens. 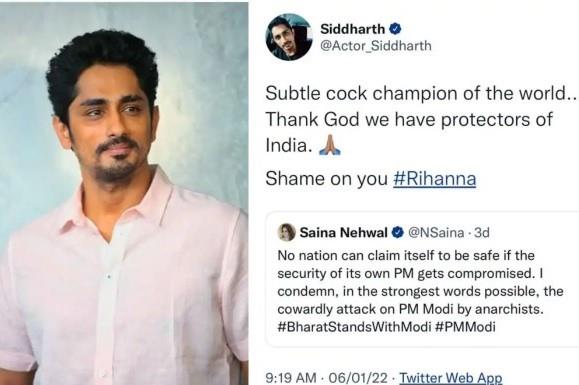 Mumbai: A post by actor Siddharth in response to a tweet by badminton player Saina Nehwal has sparked outrage on Twitter. Many people have called the actor's message misogynistic, vulgar, and sexually offensive on social media. When PM Modi's convoy was halted by protestors in Punjab on January 5, Nehwal condemned the conduct on Twitter, calling it a "cowardly attack on PM by anarchists."
The following was Saina Nehwal's tweet: “No nation can claim itself to be safe if the security of its own PM gets compromised. I condemn, in the strongest words possible, the cowardly attack on PM Modi by anarchists. #BharatStandsWithModi #PMModi (sic).” This tweet didn’t go down well with Siddharth who tweeted it saying, “Subtle cock champion of the world… Thank God we have protectors of India. Shame on you #Rihanna (sic).”
Netizens are outraged that Siddharth not only criticised a national player, but also used a sexual term to express his displeasure. As one Twitter user put it, “So @TwitterIndia provides a blue tick and normalises this crass sexual slur hurled at a national sports icon by a two-bit actor, and they talk about how they want to make Twitter a ‘safe space’ for women. This is not the first time this Siddharth Sicko has done this (sic).”
Another Twitter user said , “It’s not just young brainwashed kids who harass women online. It’s a pervasive, dirty, deep-rooted mindset. Abusing people’s mothers or using sexual slurs is getting normalised by creeps like this Siddharth guy, who are “influencers” Note the intolerance to a national icons opinion (sic).”
Siddharth also tweeted his clarification after receiving a lot of flak and stated ,"COCK & BULL. That's the reference. Reading otherwise is unfair and leading! Nothing disrespectful was intended, said or insinuated. Period (sic)."
Also Read: PM Security Breach: Supreme Court to Set Up an Independent Committee, to be Headed by former SC Judge
Siddharth is known for expressing himself on social media and has been the object of trolling on several occasions. But it hasn't prevented him from freely voicing his opinions.