After 3 civilians, 2 teachers shot dead by terrorist in Srinagar

Two Srinagar government schools teachers were killed by the terrorists on Thursday morning. 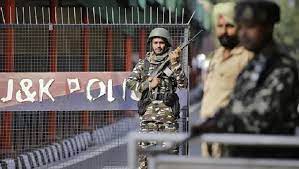 On Thursday, two government school teachers were shot dead by the terrorist in the Eidgah area of Srinagar, police said.

Police further said that the area has been sealed and the hunt has been launched to catch the militants.

Police official was quoted saying, “At about 11.15 am, terrorists, shot dead two school teachers at Sangam Eidgah in Srinagar district.”

The same incident took place in different areas of the city on Tuesday. During which three civilians, including Makhan Lal Bindroo, a Kashmiri Pandit and the owner of Srinagar's most famous pharmacy, were shot dead by suspected militants in Srinagar and Bandipora districts.

Recently, a Pakistani militant was killed and another was caught, while three others were injured by the Indian army during an operation to stop an infiltration attempt in Jammu and Kashmir's Uri along with the Line of Control on Monday night.

Since September 18, multiple search operations have been ongoing in the Uri and Rampur sectors.