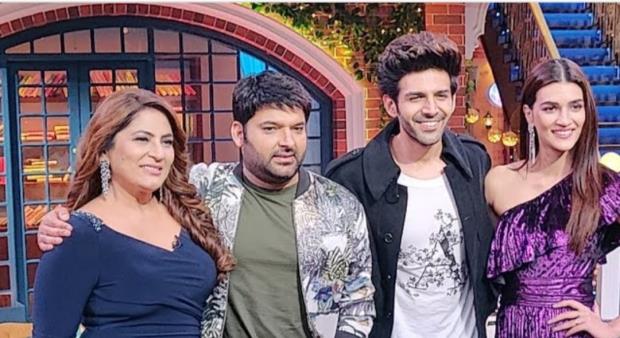 The Kapil Sharma Show: Kartik Aaryan is promoting his upcoming film 'Bhool Bhulaiyaa 2' vigorously these days. On 'The Kapil Sharma Show', Kartik was accompanied by Kiara Advani, Rajpal Yadav and the film's director Anees Bazmee. As always, funny things happened on the show about the film and the cast.
The latest promo of 'The Kapil Sharma Show' is very funny. When Kapil Sharma asked Kartik Aryan about his marriage on the show, Kartik also made the audience of the show laugh by giving a funny answer. The show host Kapil Sharma asked Kartik Aaryan about his football match, where he was seen playing football with Co-stars Abhishek Bachchan and Ranbir Kapoor.
Kartik replied to Kapil regarding the game, it is seen in the promo that Kapil asked in his style 'We have heard that you are going to play Dubai football with Abhishek Bachchan and Ranbir Kapoor ... they are married.
So what do you not think that now you  should also settle down or do you think that play as much as you want to play before marriage… after this, after giving a little pause, Kapil says 'football'… to this Kartik also responds in the same way and says that I want to play… 'football' by giving a little pause. After hearing this answer, everyone including Kiara Advani starts laughing.
Also Read: Mika Singh Swayamvar Contestants: Who are the brides? Kapil Sharma heads to Udaipur for 'Mika Di Vohti'
A funny incident happened with Rajpal Yadav
In the promo, Kapil asks Rajpal Yadav a question about clothes, and then the actor tells about a funny incident that happened in Canada, 'They are 6 feet of normal size. I went to a mall to do shopping but came back upset since he wasn't find anything related to his size. I told my wife that not a single cloth was found of my size, then my wife said that she had gone to the wrong place, she should have found it in the kid's section.
During the next promo of the show, Chandan Prabhakar will be seen pulling each other in the tantric's getup and Sumona Chakraborty in Manjulika's avatar. Seeing the promo, it can be guessed that the upcoming show of 'The Kapil Sharma' is going to be very fun.