Sachin Tendulkar said that only “ Indians should decide for India” and the country’s sovereignty could not be compromised. 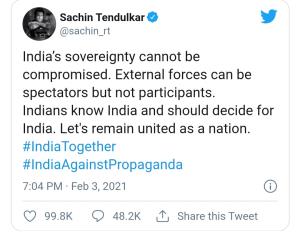 Lending his support to ‘India Against Propaganda’ campaign that emerged after pop star Rihanna tweeted in support of farmers, the former Indian Cricketer Sachin Tendulkar said that only “ Indians should decide for India” and the country’s sovereignty could not be compromised.

"India's sovereignty cannot be compromised. External forces can be spectators but not participants. Indians know India and should decide for India. Let's remain united as a nation," Sachin Tendulkar tweeted, with the hashtags #IndiaTogether and #IndiaAgainstPropaganda.

They all tweeted at a time when the government of India had again sent a notice to Twitter to comply with the orders, probably with reference to the order of withholding account posting about farmers' protest.

Besides, Bollywood actor and Punjabi singer Diljit Dosanjh hailed Hollywood pop-singer Rihanna for supporting and speaking for farmers and even dedicated a song titled ‘Ri-RI’ that calls Rihanna an angle and speaks of her home country Barbados.