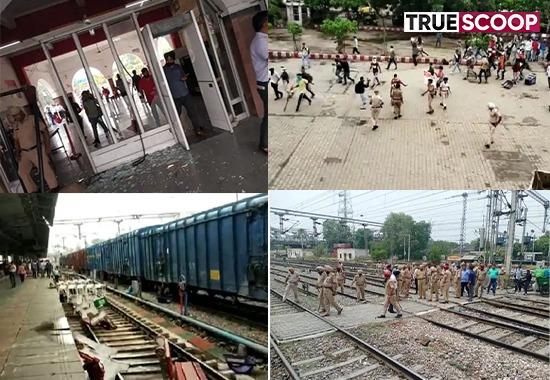 A group of protesters created a ruckus over Agnipath Scheme at Ludhiana Railway Station and also damaged the railway property at the station.

On Saturday, youth took to the streets in many districts of Punjab.  In Jalandhar, while the youths jammed the PAP chowk, they created a commotion at the Ludhiana railway station.
The outrage of the youths who have been waiting for recruitment in the railways for the last one year was seen on Saturday at the railway station of Ludhiana.

The protesting youth have been waiting for recruitment in the army for the last one year.  But after the arrival of Agneepath Yojana, their anger  increased and the youth gathered at Bharat Nagar Chowk at 10 o'clock.  After this, RPF closed Ludhiana railway station.  With this, 17 trains including Shatabdi have been canceled.

Security was increased at all major railway stations in Punjab as a precaution after demonstrations in several districts of Haryana on Friday.
All major stations of the state including Rajpura, Sirhind, Ludhiana, Jalandhar, Beas, Amritsar, Pathankot, Moga and Ferozepur stations were on high alert.  Despite this, a sabotage incident took place at Ludhiana station on Saturday.
Also Read: EXTRA LENS: Centre facing flack over Agnipath scheme; Let's unwind the controversial recruitment plan

The youth said  that they have been preparing for army recruitment for two-three years and now the government is talking about a four-year job.  Who will guarantee what will happen to them after four years of service?