Agnipath Protest in Punjab: The protest of the youth against the Agnipath recruitment scheme continues. On Saturday, youth took to the road in many districts of Punjab. 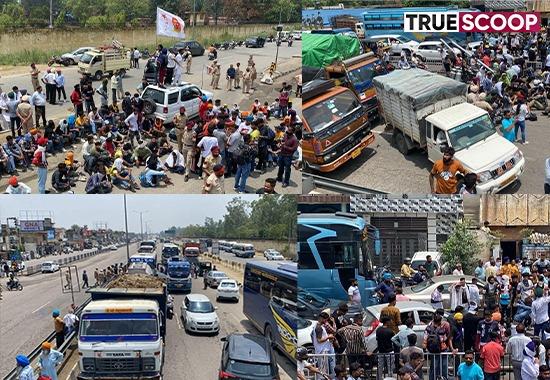 Agnipath Protest in Punjab: The protest of the youth against the Agnipath recruitment scheme continues. On Saturday, youth took to the road in many districts of Punjab. While the youth blocked PAP check-in in Jalandhar, there was a ruckus at Ludhiana railway station. For the last year, the anger of the youth waiting for recruitment in the railways was seen at the railway station. After the protest, Northern Railway cancelled 17 trains.
The protesting youth were waiting for recruitment into the army for the last year. But after the arrival of the Agneepath scheme, their anger increased and youth gathered at Bharat Nagar Chowk at 10 o'clock. After this, he made a group in the form of a march and reached the railway station via Jagraon bridge.
Earlier, the pilot vehicle of the police on Jagraon bridge was also vandalized and after reaching the railway station, broke the glass of various offices of platform number one. Along with this, stones were thrown on the track to obstruct the track and Dukh Nivaran Sahib escaped while walking on the track towards Gurudwara.
Also Read: Agnipath Protest: Elderly couple narrowly escape mob's stone-pelting in horrific video; Watch
The rail engine was also vandalized
During this, railway employee Ranjit Kaur also suffered heavy injuries. Those who have been sent to the civil hospital for treatment. There was also heavy damage to railway property. A railway engine was also vandalised. Some miscreants have also been arrested by the District Police Police near Gurdwara Dukhnivaran Sahib. For those who have been taken to different police stations and further action will be taken only after interrogation.
These trains will remain cancelled
13258 Anand Vihar T.- Danapur Jansadharan Express 22406 Anand Vihar T- Bhagalpur Garibrath Express 20802 New Delhi-Islampur Magadh Express 13484 Daily-Malda Town Farakka Express 12802 New Delhi-Puri Purushottam Express 15657 Delhi-Dibrugarh Brahmaputra Mail 14006 Anand Vihar T- Sitamarhi Lichchavi Express 12562 New Delhi-Jaynagar SS Express 02564 New Delhi-Saharsa Express 12554 New Delhi-Saharsa Vaishali Express 15622 Anand Vihar T- Kamakhya Express 12312 Kalka-Howrah Mail 13010 Yognagri Rishikesh- Howrah Express 12370 Dehradun-Howrah Express 13152 Jammu Tawi-Kolkata Express 15654 Jammu Tawi-Guwahati Express 14224 Varanasi-Rajgir Express