Today, Railways has cancelled about 700 Trains, keeping in mind the law and order and demonstrations by miscreants in the protests due to the Agnipath scheme in many states. 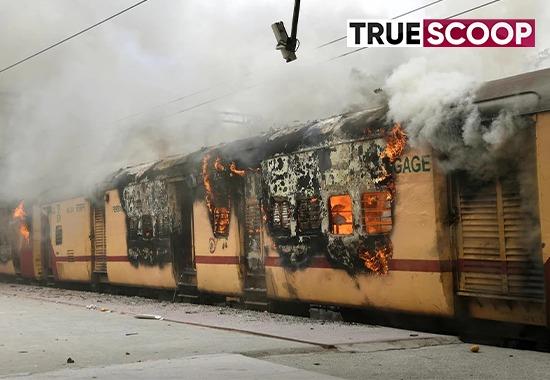 Cancelled Train 2022: Indian Railways is considered to be the lifeline of the common people of the country. Every day thousands of trains are operated by the Railways. In such a situation, if the trains are cancelled, then people have to face great inconvenience. Today, Railways has cancelled a large number of trains, diverted train lists and rescheduled train lists.
The main reason for this is the protest against the Agneepath scheme. A large number of trains have been cancelled in different parts of the country. In many states like Bihar and Uttar Pradesh, there are huge protests due to the new scheme of recruitment in the army i.e. Agnipath Scheme. In many places, trains have been set on fire in the name of protest.
Due to this, the railways have suffered heavy losses. Keeping in view the maintenance of law and order and the safety of the passengers, the Railways has decided to cancel a large number of trains. Apart from this, sometimes due to bad weather or rain, storm etc., trains have to either be cancelled or have to be diverted and rescheduled.
Also Read: Ludhiana protest 'was preplanned' suggest viral video, multiple WhatsApp groups show demolition plans
Today, Railways has cancelled about 700 Trains, keeping in mind the law and order and demonstrations by miscreants in the protests due to the Agnipath scheme in many states, the Railways has decided to cancel a total of 676 trains. At the same time, it has also been decided to reschedule a large number of trains. A total of 18 trains have been rescheduled today. At the same time, it has been decided to divert a total of 6 trains. If you are going to travel by train today, then follow the steps given by us-
How to see the list of cancelled, rescheduled and cancelled trains-
Railways have put up a list of fully and partially cancelled trains on its website for the passengers’ convenience. The national transporter has requested passengers to check train details by visiting https://enquiry.indianrail.gov.in/mntes or NTES app before planning their trip.
To check the list of cancelled trains, first of all, visit the website enquiry.indianrail.gov.in/mntes/.
The Exceptional Trains option will appear. Select this option.
Click on List of Canceled, Rescheduled and Diverted trains.
Get out of the house only after checking this or else you may have to face trouble later.