Agra Viral Video: Angry wife beats up husband after she catches him cheating red-handed in a hotel, watch

The wife has accused her husband of having an extramarital affair with a woman. 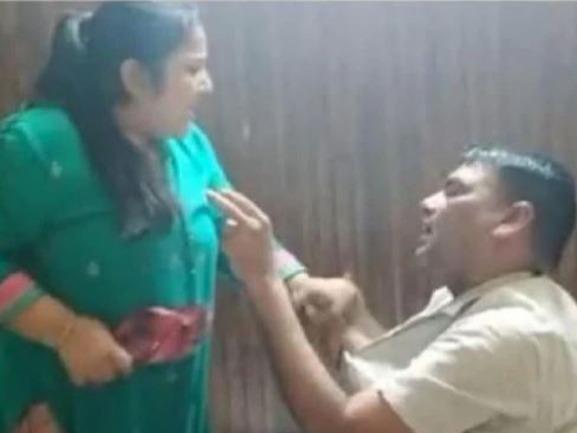 A video has been surfacing from Agra where a woman can be seen teaching a nice lesson to her husband after he was caught cheating on her. The case that has been making headlines is from Uttar Pradesh.

According to the information that has been received where a wife caught her husband in a hotel with his lover. After seeing this, she lost her temper and taught a great lesson to both of them. Since then the video has been going viral on all social media platforms.

The wife’s name is Neelam and Husband has been identified as Dinesh, both are residents of Diuri Road, Delhi. The wife has accused her husband of having an extramarital affair with a woman. She found her husband and his lover in a hotel in Agra.

It can be seen that the woman and her husband are having a heated argument, after which the lady has left the man and gone to her parent’s house. The accused works in a nursing home. Both of them have a 16-year-old daughter together.

Reportedly, as soon as Neelam got to know that her husband is in a hotel with another woman, she reached the spot and caught them red-handed. She started hitting both of them with slippers while her husband kept apologizing.

Another woman is also seen apologizing to Neelam. She can be heard saying that it was a mistake and that she will never repeat it. This whole drama continues for hours in the hotel and after that, both of the accused were taken into police custody.