Ranbir Kapoor and Alia Bhatt were spotted in Jodhpur on Sunday. 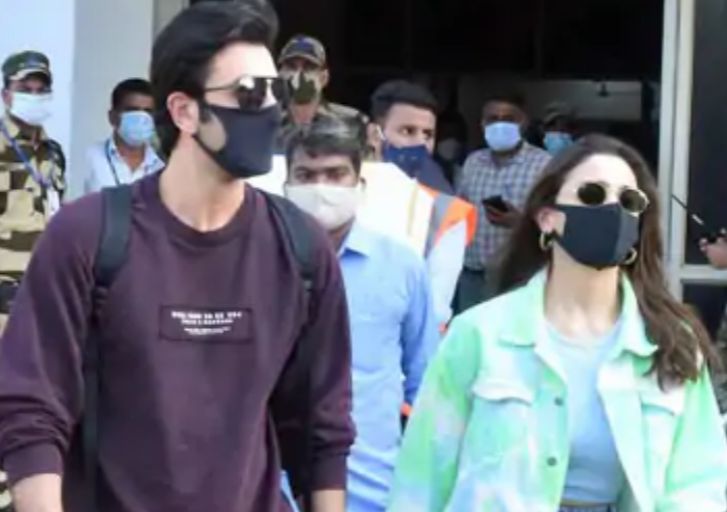 Bollywood heartthrob Ranbir Kapoor will be turning a year older on September 28 (Tuesday). So ahead of his 39th birthday, Ranbir along with his ladylove Alia Bhatt was spotted in Jodhpur.

Alia was dressed in a pair of jeans with a crop top. She completed her look with a green and white jacket and a pair of sunglasses. Ranbir, on the other hand, opted for an all-burgundy outfit.

Last year, Ranbir Kapoor celebrated his birthday with his mom Neetu Kapoor, sister Riddhima Kapoor Sahni and girlfriend Alia Bhatt. To wish her boyfriend on his special day, Alia shared a photo of the actor with two birthday cakes. She wrote, "happy birthday 8," followed by a heart emoji.

Alia and Ranbir, who have been dating for almost four years, are speculated to tie the knot in the near future. Speaking with former journalist Rajeev Masand, Ranbir said, “It would have already been sealed if the pandemic hadn’t hit our lives. But I don’t want to jinx it by saying anything. I want to tick mark that goal soon in my life.”

All through lockdown, Alia Bhatt and Ranbir Kapoor were staying together and the actress was like a pillar of support to the Kapoors when Rishi Kapoor passed away in April 2020. She has also been accompanying Ranbir and Neetu Kapoor to oversee the construction work at the Kapoor’s plush bungalow Krishnaraj.

On the work front, Alia will be next seen with Ranveer Singh. The duo will be paired together in Rocky Aur Rani Ki Prem Kahani. The film also stars veterans Dharmendra, Jaya Bachchan and Shabana Azmi in pivotal roles and will be helmed by Karan Johar.

On the other hand, Ranbir will be next seen in Animal and Shamshera. The duo will be paired for the first time for their upcoming film Brahmastra which also stars Amitabh Bachchan, Mouni Roy and Nagarjuna.