Alia Bhatt blushes; Reporter asks if 'R' is lucky for her 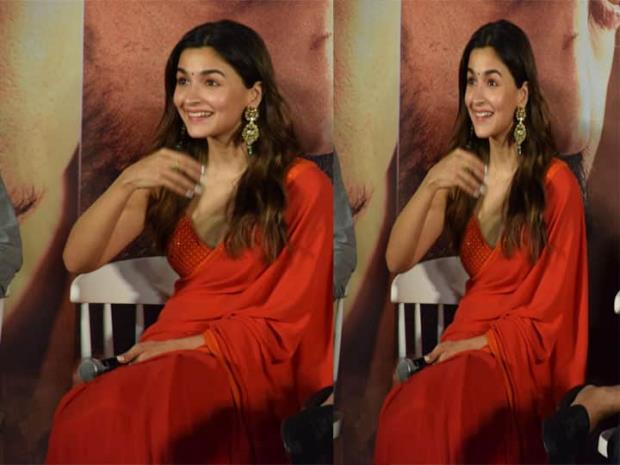 The upcoming movie of Alia Bhatt RRR will release in cinemas on 7 January 2022. The trailer of the movie launched on December 9, 2021. During the event launch the director of the movie SS Rajamouli, the star cast of the movie Ajay Devgan, Jr Ntr and Alia Bhatt were present there.
RRR is an Indian Telugu-language period action drama film. The movie is directed by SS Rajamouli. It is produced by D. V. V. Danayya of DVV Entertainments. The movie was initially scheduled to release on 30 July 2020, but due to some production delays and the covid-19 pandemic, the movie is now scheduled to release on 7 January 2022.
While interacting with the media one of the reporters asked Alia if the letter 'R' is a lucky factor for her, indicating at Ranbir. At this Alia start blushing and replied, "I am stumped. Mere paas jawaab hi nahin hai. I am trying to be intelligent. I don't have a good answer." Then she added, "R is a lovely alphabet, but so is A."
Alia is always an out-spoken person, but this time when the reporter asked her about the letter 'R', Alia couldn't stop blushing. Alia and Ranbir are dating each other for a long time. The couple is supposed to get married once they fulfill their professional commitments. Both the actors have seen each other together in Public meets and shared their pictures on social media.

The fans are waiting for the actors to get married as soon as possible. Both Alia and Ranbir will have a movie release in 2022. They will be seen in Brahmastra together along with Amitabh Bachchan. The movie is directed by Ayan Mukerji and produced by Karan Johar.