Former Punjab Chief Minister Captain Amarinder Singh on Saturday slammed the Congress over the preposterous lies being floated by various party leaders in a clear bid to cover up their mishandling of the crisis in the state. 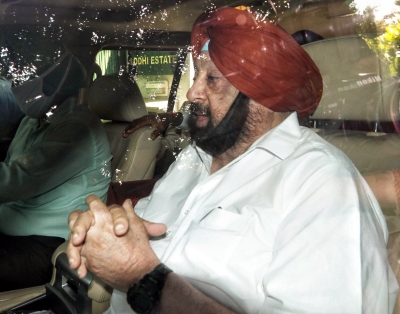 Former Punjab Chief Minister Captain Amarinder Singh on Saturday slammed the Congress over the preposterous lies being floated by various party leaders in a clear bid to cover up their mishandling of the crisis in the state.

Pointing to the conflicting numbers shared by Harish Rawat and Randeep Surjewala on the purported letter received by the party's central leadership expressing lack of confidence against him, Captain Amarinder termed it a comedy of errors.

His remarks came after Surjewala claimed that 78 of the 79 Punjab Congress MLAs had written to the party leadership seeking Captain Amarinder's ouster.

Interestingly, just a day earlier, Harish Rawat had, in a press statement, said that 43 MLAs had written to the high command on the issue.

"It seems the entire party has become imbued with Navjot Singh Sidhu's sense of comic theatrics," he quipped, retorting, "Next they will claim that 117 MLAs wrote to them against me!"

"This is the state of affairs in the party. They cannot even coordinate their lies properly," remarked Captain Amarinder, adding that the Congress was in a total state of disarray, and the crisis seemed to be escalating by the day, with a large majority of its senior leaders completely disenchanted with the party's functioning.

The fact of the matter, said the ex-Chief Minister, was that the 43-odd MLAs who had signed the said letter had been forced to do so under duress.

Having been pushed into a corner over its mishandling of the Punjab crisis, the Congress was now in a total state of panic, which was evident in the statements of its leaders, said Captain Amarinder.

The former Chief Minister said the panic-stricken party, grappling with internal chaos, was trying hard to shift the blame of its own failures.

"It's sad to see the way they are resorting to blatant lies to justify their wrongdoings," he added.

He pointed out that since 2017, the Congress had swept every election in Punjab with him at the helm of the government, which was in total contrast to the claims being made by the party leadership.

In the last Assembly elections, the party won an unprecedented 77 seats. In the by-elections in 2019, Congress won three of the four seats, even winning from Sukhbir Badal's stronghold of Jalalabad.

Even in the 2019 Lok Sabha polls, the party swept eight of the 13 seats despite the massive BJP wave in the country, said Captain Amarinder.

And as recently as February this year, in the seven municipal corporation elections, Congress won 281 of the 350 seats (80.28 per cent), he said, pointing out that in the Municipal Council elections of the 109 municipal councils, the party won 97.

Clearly, the people of Punjab had not lost trust in him, as claimed by Surjewala, said the former Chief Minister, adding that the whole affair had been orchestrated by a few leaders and MLAs at the behest of Navjot Singh Sidhu, who, for some inexplicable reason, was being allowed to dictate the terms for the Congress in Punjab.

This was evident from the lies Harish Rawat had mouthed yesterday, even on a sensitive and emotive issue like Bargari and the subsequent police firing cases, said Captain Amarinder, warning that the party will have to pay a heavy electoral price in the state for these falsehoods.

"Had I been hand in glove with the Badals, as they are alleging, I would not have spent the last 13 years fighting them in courts," he said, lamenting that not a single party leaders had stood by him in his legal battles.

Further, in the Kotkapura and Behbal Kalan firing cases, senior most police officers, including IGP Pramraj Umranagal and SSP Chanranjit Sharma, were arrested within two years of the Congress taking over the state's reins.

About 12 people, including former DGP Sumedh Singh Saini and former MLA Mantar Singh Brar, were nominated and chargesheeted in the case.

In both these cases, seven chargesheets were filed but some of these were stuck down by the high court, he said, adding that the entire bogey of no action in these cases was created by Sidhu and his aides whose only interest was to grab power, by hook or by crook.