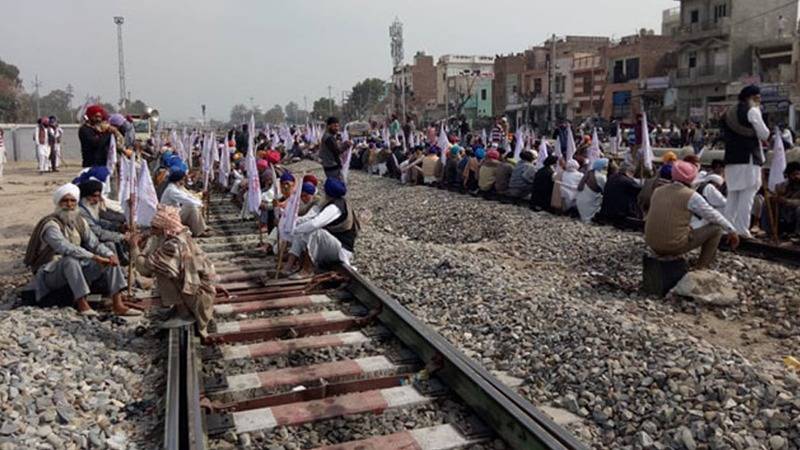 Heeding to the appeal of Chief Minister Amarinder Singh, 30 protesting farmers' organizations in Punjab on Wednesday decided to allow goods trains to ply till November 5, while passenger train services would continue to remain disrupted in the state.

However, their sit-in protests against BJP leaders, corporate houses, and toll plazas would continue. They would meet again on November 4 to decide on the next course of action.

These decisions were taken at a meeting called by 30 farmers' bodies here on Wednesday, a day after the legislative Assembly unanimously passed three Bills and formally rejected the 'black' farm laws brought by the BJP-led Union government.

Bharatiya Kisan Union (Rajowal) President Balbir Singh Rajowal told the media after the meeting that the Bills brought by the state government have strengthened their movement against the Central laws.

"It (passing of the Bills) is a big achievement in our fight," Rajowal told IANS.

He made it clear that allowing goods trains to ply doesn't mean that they have withdrawn their agitation across the state.

"Our protest against the Modi government would continue," he said.

On the passing of the Bills, Rajowal said that it was for the first time that a special session of the Assembly was convened to negate the Central laws.

The three Bills, rejecting outright the Centre's 'anti-farmer' laws, and the proposed Electricity Amendment Bill that led to widespread protests by the farmers in the agrarian states of Punjab and Haryana, were passed with a voice vote in the Congress-ruled Assembly amid the presence of the opposition Shriomani Akali Dal (SAD) and the Aam Aadmi Party (AAP) members.

However, both the BJP members remained absent from the House.

Also Read: Sonalika all set for the expected high demand for tractors this festive season

After passing of the Bills, Amarinder Singh appealed to the protesting farmers to allow the movement of trains for the transportation of coal, urea, and foodgrains, pointing out that the state had already lost Rs 40,000 crore in revenues due to the 'rail roko'.

Industry and business are as much the responsibility of the state government as is agriculture, he said, adding that the farmers' fight is against Delhi, not against Punjab.

Meanwhile, at the media briefing of the farmers' leaders, a group of petrol pump operators entered the venue and raised slogans against the farmers.

Their grouse is that they are operating the business of a particular corporate house and the protesting farmers are staging sit-in protests outside their pumps, not allowing any customer to purchase oil. Their sales have dipped to zero and the employees are sitting idle, they alleged.