Amidst Ayushman scheme row; CM Mann says 'Punjab will not need it from next year', makes BIG promise

He said that by next year he will make Mohalla clinics so efficient that Punjab will not feel the need for Ayushman Scheme. 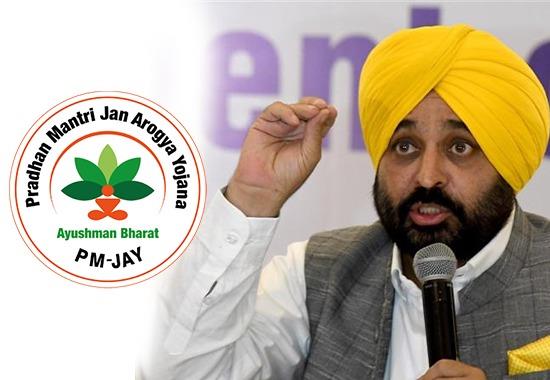 Punjab Chief Minister Bhagwant Mann today made a big statement on Ayushman Bharat Scheme which was started by the Central government.
Bhagwant Maan has said that the amount that was due for PGI has been paid and the treatment will start in the hospital soon. He said that by next year he will make Mohalla clinics so efficient that Punjab will not feel the need for Ayushman Scheme.
Bhagwant Mann said that the hospitals of Punjab will also be improved in which everyone will be treated free of charge.
Bhagwant Mann said that only a few categories of people come under the Ayushman scheme who get benefits and only a few people get free treatment.
The money was not paid to the PGI hospital under the Ayushman scheme by the Punjab government, due to which the free treatment of patients hailing from Punjab was stopped in the PGI in the last few days.
At the same time, cases of fraud in the Pradhan Mantri Jan Arogya Scheme have also come to the light in Punjab and Haryana.
Under the Ayushman Bharat scheme, 26 percent of fraud has been claimed in both the states of the entire country.
The situation is even worse in Punjab, where the scheme is mired in controversy. Due to this scheme, the state government has stopped the dues of about 250 crore rupees from private hospitals on complaints of abuse.
According to data collected by the Union Health Ministry, state health agencies in 17 states have detected 24,152 fraudulent claims, of which 6,161 cases have come from Punjab and Haryana.
In Punjab, 682 private hospitals and 245 government hospitals have been listed under this scheme.
The ministry has warned that such kind of fraud will not be tolerated under this scheme and if anyone does it, strict action will be taken against the same.