Arjun Kapoor said that he and his sisters have a good relationship and that they appreciate one other. He went on to say that he prefers not to 'interfere' too much in their lives. 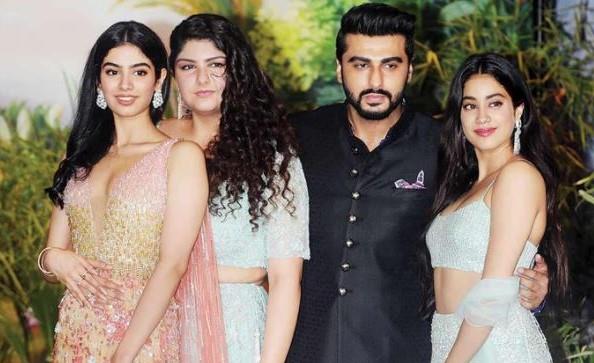 Arjun Kapoor speaks openly about his relationship with his sisters, saying that although they talk about personal topics, he keeps out of their lives. He said that there is mutual respect on both sides, but that, as the older brother, he enjoys joking with them a little too much. He added in a recent interview that he "hates" creating a "fake perception" about his relationship with his sisters and would rather talk about it the way it is.
Boney Kapoor's children with his first wife Mona Shourie are Arjun and his sister Anshula Kapoor. Boney's daughters with late actress Sridevi are Janhvi and Khushi Kapoor. After Sridevi's passing in 2018, Arjun earlier said that all of Boney's children connected. Janhvi said on Koffee With Karan that they are all members of a WhatsApp group called 'Dad's kids.'
When questioned about his relationship with his sisters, Arjun replied in an interview with Masala.com: “The good part is that they respect me and I respect them. I do tend to bully in the sense that I do tend to troll them from time to time because I have a snarky sense of humor and I do tend to crack a few extra jokes.”
“About advice, we don’t live together now so we’re not discussing everything on a day-to-day basis. I hate creating this fake perception that we have are one happy family living under the roof and discussing everything. We have discussed many things, and we continue to do that. But it’s still a very intimate space for us to come out so openly and speak about. I am somebody who believes in letting people do what they choose to do. I don’t interfere. But yes, if one of them comes to me to talk about something, I’m always there to give my two cents on my experience,” he stated.
Arjun stated Janhvi and Khushi helped him improve his connection with his father Boney in an interview with Harper's Bazaar India earlier this year.
“We have all confronted many of our demons. It has to do with letting go, which is very cathartic... it is strangely therapeutic to just sit around and talk rubbish, and realise that you were holding onto things, unknowingly or knowingly, because you were supposed to. But I love my father more because of both of them. It is complex. I have been able to see my father in a different light. If I didn’t share this equation with Janhvi and Khushi, I would have resented many things and never felt the need to reconnect with him at this level,” he added.
Also Read : Rohit Purohit shares his fitness regime for 'Dhadkan Zindaggi Kii'
Arjun Kapoor's most recent film was Bhoot Police, which was released in September on Disney+ Hotstar. In his next films, he appears with John Abraham, Tara Sutaria, and Disha Patani in Ek Villain Returns.