The matter came up before Justice Sambre with Khan's lawyer Satish Maneshinde seeking an urgent hearing on Friday or Monday. 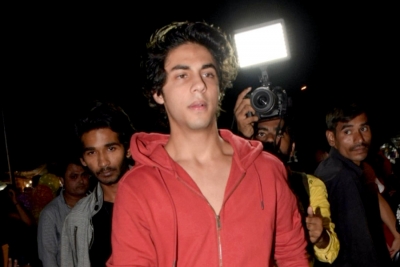 Spelling no respite for Aryan Khan, a special NDPS court on Thursday extended his judicial custody till October 30, even as his bail plea is expected to come up before Bombay High Court on October 26.

Along with Aryan Khan - the son of superstar Shah Rukh Khan, the other seven accused - arrested by the Narcotics Control Bureau on October 3 after the October 2 raid on a rave party aboard a cruise ship - were also sent to judicial custody till October 30 by the court.

They are: Arbaaz Merchant, Munmun Dhamecha, Nupur Satija, Ishmeet Singh Chadna, Mohak Jaswal, Gomit Chopra and Vikrant Chhoker. Twelve others were arrested by the NCB during the subsequent investigations.

Aryan Khan's judicial custody was set to expire on Thursday.

Earlier on Thursday, Justice N. W. Sambre of the Bombay High Court posted to October 26 the hearing of the bail application of Aryan Khan, who was declined bail by the Special NDPS Court on Wednesday.

Also Read: Is Bollywood a soft target for the NCB?

The matter came up before Justice Sambre with Khan's lawyer Satish Maneshinde seeking an urgent hearing on Friday or Monday.

However, Justice Sambre decided to take up the matter on Tuesday next only.