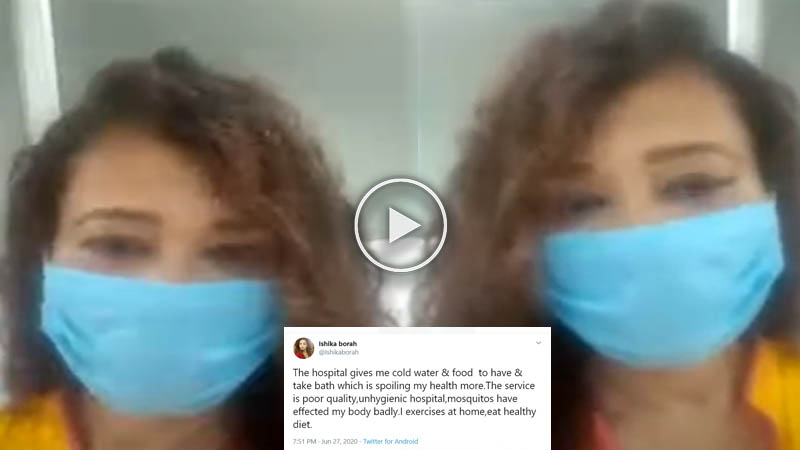 The government hospital authorities in Nagaon, Assam, where Bollywood actress and model Ishika Borah, 31, is undergoing Covid-19 treatment, on Monday rubbished her claims that she was not receiving medical care.

In a disturbing tweet, Borah, who had tested Covid-19 positive on June 24, wrote about her "suicidal tendencies" and claimed she was not getting medical care, proper food, and the hospital premises was unhealthy.

Terming Borah's charges baseless, Nagaon District Government Hospital Superintendent L.C. Nath told IANS over the phone they were providing her all the facilities as per the government SOP (standard operating procedure) and Covid-19 medical protocol.

"We have also arranged a psychiatrist, but she rejected any counseling and guidance. She wanted certain fruits, drinks, and food. As per the government norms, we are unable to meet her demands," Nath said from Nagaon, 130 km northeast of Guwahati.

Borah's charges, her non-cooperation with doctors, nurses, and hospital staff had been communicated to Nagaon Deputy Commissioner Jadav Saikia and the District Superintendent of Police for appropriate measures, he added.

As Borah came to Assam from Mumbai, she was required to undergo 14-day institutional quarantine. "She would be released from the hospital when her swab samples would test negative at least twice," Nath said.

The Nagaon Deputy Commissioner told IANS over the phone that Borah was being provided all medical care and services.

A native of Nagaon in central Assam, Borah has appeared in several international print shoots in Mauritius and Dubai, and in fashion shows for various television channels. She has also featured in many music albums.

Borah, a model who featured on the cover of Debonair magazine four times, in a spate of tweets pointed to the poor condition of the hospital and "negligence of the staff."

When the actor arrived at her home town, she had a mild temperature. "I could have home quarantined for 14-day as per the government instructions," she tweeted.

Borah tweeted that poor hospital food and cold water for bathing was spoiling her health. The hospital services were poor and unhygienic, and mosquitoes were troubling her, she tweeted. "I exercise at home, eat a healthy diet," the model-actress said.

In another tweet, she claimed to have knowledge about Covid-19 treatment in an organic way. "Turmeric warm water, vitamin C, cucumber and tomatoes, Chawanvrash, ashwagandha, giloy can heal and cure the initial stage of COVID. Pls help me, I am getting distressed and suicidal tendencies, because of depression now."

Borah, who claims to be currently acting in two South Indian films, said, "For this minor temperature, I could have taken care of myself in a better way with organic medicines, herbs, soups, vitamin C and fruits."

When doctors and nurses never come to see us, she tweeted, "So why (did) they kept us here."