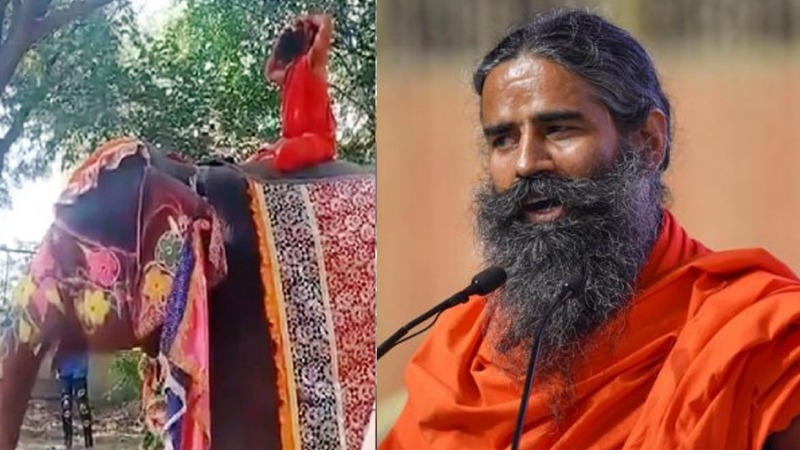 Yoga guru Baba Ramdev has come under the scanner for doing yoga on an elephant on a TV channel. Advocates in Agra have sent notices to Baba Ramdev, director of the TV channel and Elephant Rescue Center Churamura, calling it animal cruelty under the Wildlife Protection Act.

Agra notices Narendra Sharma, SP Bhardwaj, Gagan Sharma, Rajveer Singh and Rakhi Chauhan have sent this notice jointly. Advocates called a press conference in the civil complex on Thursday. Advocates said that Baba Ramdev aka Ram Krishna Yadav, has been sent to the TV channel and director of Elephant Rescue Center Churamura Mathura. The Yoga practices described by Yoga Guru Ramdev, the founder of Pantjali Yoga Peeth, are followed by millions of people. Doing yoga on an animal that has a place as a symbol of religion and religion by the Yoga Guru comes under the category of animal cruelty under the Wildlife Protection Act. Baba Ramdev's act is to cause mental anguish and to inspire atrocities on animals.

The government also prohibits the use and display of special category animals for commercial activity. There is a provision for punishment and fine on its violation. No message was given by the TV channel about the attitude towards animals. Likewise, the elephant rescue center Churmura did not comply with its obligation. Advocates have asked to reply to the notice in seven days. 11 thousand rupees have also been demanded as notice fees. Advocate Narendra Sharma said that legal proceedings would be taken if not satisfactory.

This incident is of the apathetic Karshani Ramnareti Ashram Mahavan. Where Yoga Guru Baba Ramdev was performing Monday Yogasan. Adorned elephants were called for this. Yoga and meditation were done with the saints and students of the school near the deer place in Ramnareti Ashram.

Get the latest update about Trending, check out more about Baba Ramdev Falls Off The Elephant, Baba Ramdev Gets Legal Notice, Top English News & Animal Cruelty