Bangladesh's Hindu leader pictures are going viral ever since it has been shared on social media and exposed the atrocities of Bangladesh over its minorities, especially Hindus. 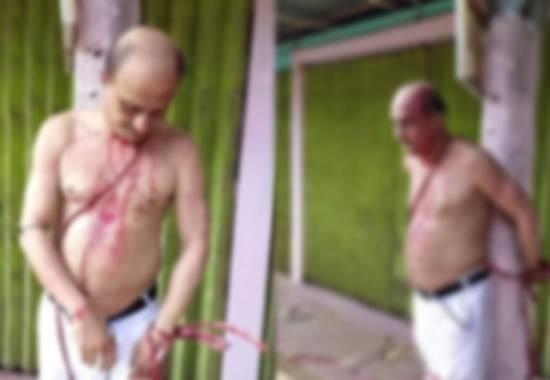 The incidents of intolerance against Hindus and minorities have been increasing day by day in Bangladesh. In another gruesome incident, a Hindu leader was recently tied to a tree and was fiercely beaten up during an Iftar party in Chittagong. Bangladesh's Hindu leader pictures are going viral ever since it has been shared on social media and exposed the atrocities of Bangladesh over its minorities, especially Hindus.
As per various media reports,  a Hindu leader names Jitender Kanti Guha was attacked in a medieval manner by local Awami League leader Mohammad Jasim for not participating in the Iftar party. Reportedly,  the incident occurred in Bangladesh's South Chittagong on Friday, April 29, over an invitation to an Iftar party. The report said that Jitendra Kanti Guha, vice-president of Chittagong South of the Bangladesh Hindu Buddhist Christian Oikya Parishad, was reportedly tied to a tree and then beaten at Haidgaon Union in Patia Upazila of Chattogram.
Bangladesh Hindu leader Jitender Kanti viral pictures show him bleeding and tied to a tree in a bare body. Reportedly, the Hindu leader was then shifted to a nearby hospital where he is currently undergoing treatment. As per the media report, the incident occurred when an iftar party was going on at Gauchia Community Centre. The event was organised by the Haidgaon Union Awami League.
However, it was revealed that the organiser did not invite Union Parishad (UP) chairman BM Jasim, which resulted in the controversy. While reacting to the incident, Shahidul Islam Zulu, the joint convener of the Haidgaon Union Awami League (UAL), stated that Jasim was not invited to the 'mehfil' as he had recently joined the ruling Awami League.
Jasim came to the venue with at least 40 people and started abusing different people who were present at the party. He also abused Mahmudul Haque Hafez, convener of the Union Awami League. While a heated argument was going on, a former member, Inderjit Leo, started beating Jitender Kanti Guha. Subsequently, other people who came with Jasim tied Guha to a tree and beat him until blood drew from his body.
See Hindu leader Jitender Kanti Guha Viral Photos
Also Read: Border Bandwidth: N-E states e-connect with the world via Bangladesh