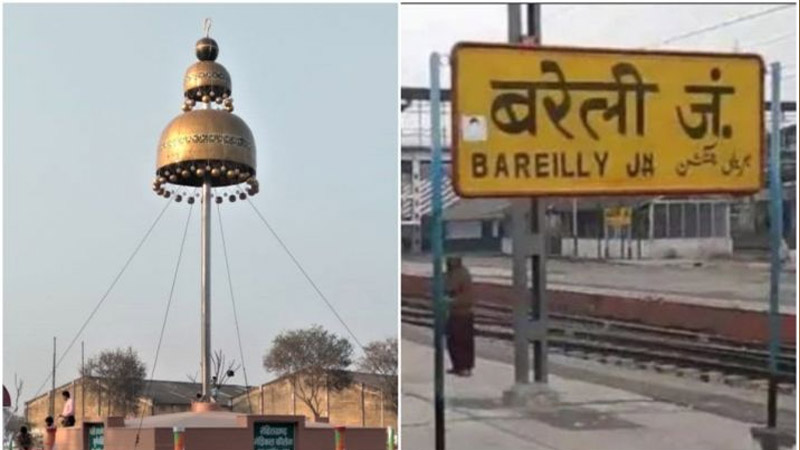 "The location was chosen to ensure that if you come from New Delhi, the first thing catching your attention on entering Bareily is this fabled ornament,” said a senior Bareilly Development Authority (BDA) official.

Official added, the idea to give the city a distinct identity had been in the pipeline for quite some time now. The city got its branding in 1966 thanks to that popular number ‘Jhumka gira re, Bareilly ke bazaar main’ sung by film star Sadhana in the movie ‘Mera Saya.’ “So we thought why not cash in on the popularity of the song,” the official said.

The idea was initially conceived in 1990, however, the project hit a roadblock because of the scarcity of funds. But BDA vice-chairperson Divya Mittal found a way out. She discussed the project with some eminent citizens and the director of Bundelkhand College, Dr Keshav Aggarwal readily agreed to bankroll the idea from Corporate Social Responsibility fund, said an official.

The plan also includes putting up three surma (kohl) bottles surrounding the main structure at the roundabout. Surma bottles would be kept on the parapet walls and would be floodlit.

The 20-feet high shiny yellow gold dangler with a brown emblem and a hook has a diameter of eight feet and was cast in brass in Moradabad, the city famous for the metal. It was designed by an artist from Gurugram. While BDA officials are unwilling to disclose the project cost, sources say Rs 60 lakh have been spent on giving shape to the project.

So next time when you visit Bareilly, do not forget to get a selfie clicked at the place with iconic jhumka.

Get the latest update about Distinct Identity, check out more about True Scoop, True Scoop News, Jhumka Found & Iconic Jhumka in the City