The Bareilly vegetable vendor named Sharif was caught recorded and caught red-handed while urinating into the vegetables and therefore he was beaten blue and black by the locals as well. 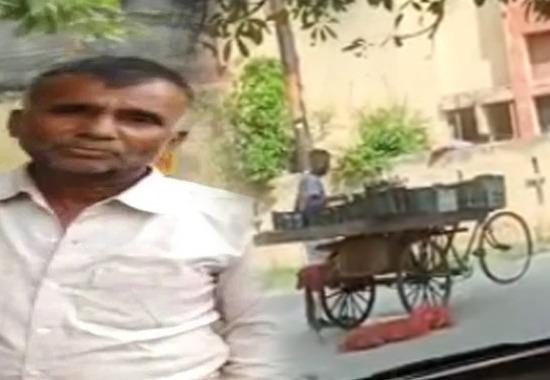 In an absolute shocker, a vegetable vendor named Sharif was beaten by locals and handed over to the Police after he was caught urinating into the vegetables and selling them to the Hindu majority localities in UP, Bareilly. The Bareilly vegetable vendor viral video is doing rounds on social media with netizens expressing rage over such a disgusting crime. Sharif was caught recorded and caught red-handed while urinating into the vegetables and therefore he was beaten blue and black by the locals as well. After he was handed over to the police, Bareilly Police has registered a case against the accused.

Reportedly, the Bareilly Police vegetable seller viral video incident was recorded Izzatnagar area. OPIndia quoted a local who revealed that when he was going somewhere in his car, he noticed 55-year-old Sharif pulling a vegetable cart on the colony’s roadside and urinating on the vegetables kept under the handcart. As a result, he recorded the entire incident so that he can confront him with proof. In the Bareilly vegetable vendor urinating viral video, it can be seen the 55-year-old arranging his vegetable cart. At first, the vendor seemed like all other vegetable vendors, however, when the video gets zoomed it can be seen Sharif urinating on the vegetables kept under the handcart.

As per Bareilly SSP Styarth Anirudh Pankaj the accused was identified as Sharif who was caught urinating in the viral video. Currently, police are interrogating Sharif and thereafter he will be produced before the court. During the interrogation, it was learned that Sharif is a resident of Partapur Chaudhary police station, Izzatnagar. He has been booked for disturbing the communal atmosphere, hurting religious sentiments, and spreading infection.

It is pertinent to mention here that an illegal hookah bar was recently busted in Badaun, UP after its video showing young girls had gone viral. It was revealed that the owner of the hookah bar used to film Hindu girls coming to parties and following that they were blackmailed by them.