The traffic, which had slowed down since morning, turned into a traffic jam after 8 in the morning. From Gurgaon to Noida, all the borders of Delhi have been jammed for several kilometres. 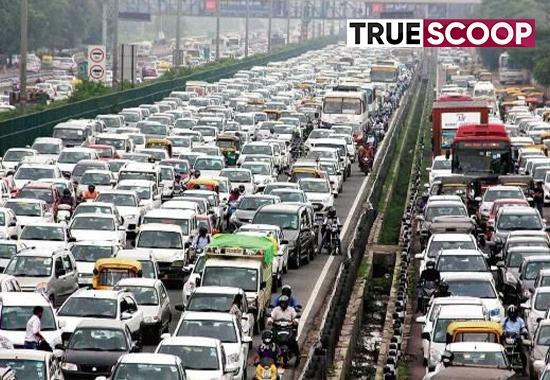 Bharat Bandh June 20: Many organizations have announced a Bharat Bandh against the Agnipath scheme for army recruitment. Some organizations that announced the bandh had also announced a Delhi march. Delhi Police is alert about this and checking is being done at all entry points in the capital. The traffic, which had slowed down since morning, turned into a traffic jam after 8 in the morning. From Gurgaon to Noida, all the borders of Delhi have been jammed for several kilometres as thousands of cars are crawling.
Apart from this, on Monday, former Congress President Rahul Gandhi will appear before the ED in the money laundering case related to the National Herald, due to which the traffic police have closed many routes. Its effect is visible on the roads even within Delhi.
Traffic jam on Sarhol Border There is heavy traffic on the Delhi-Gurugram Expressway at the Sarhol border. Here the Delhi Police is checking vehicles given the Bharat Bandh called against the Agnipath scheme. Due to this, long queues of vehicles are visible on the Sarhaul border. Gurugram Police intervened and got the barricading of Delhi Police removed at 10.15 am on the Sarhol border as the jam got longer. Due to this people got some relief. The Delhi Police was checking the vehicles since 7.30 am. During this, there was a ban on the entry of heavy vehicles into Delhi.
In Noida too, the police is busy checking the vehicles since morning at the Delhi-Noida border. There is also a huge jam on the Delhi-Noida border. Thousands of vehicles are stuck on Expressway, Mahamaya Flyover, and Film City. People looked very upset because it was time to go to the office.
Heavy traffic jam in Delhi-NCR
Delhi Police is not allowing vehicles to enter the capital without checking given the announcement of a march to Delhi by organizations opposing Agnipath. Due to this, long queues of vehicles are seen from Sarhol border to Atlas Chowk, Delhi-Noida Link Road, Delhi-Noida-Direct Flyway, and Chilla Border from far and wide. There is a two-kilometre-long jam on the Noida Expressway from Mahamaya Bridge to Noida Gate.
It takes half an hour to cross the Delhi border from Noida traffic
slowed down due to checking at the Delhi-Noida border. The vehicles took up to half an hour to cross the Delhi border from Noida. This happened so that some youth groups who called for Bharat Bandh could not carry out violent incidents. A spokesperson of the traffic police said, “Almost every vehicle is being checked by the Delhi Police, especially the ones containing only boys. Apart from this, suspicious vehicles and people from outside the city are also being investigated. Barricades have been put up and traffic is slow, especially from Mayur Vihar towards DND Flyway, Kalindi Kunj and Chilla Border DND Flyway, Kalindi Kunj and Chilla border.
There was a huge jam on the roads of Noida
There is a jam on the road going from Noida to Delhi. Police are investigating at DND Flyway given Bharat Bandh. Due to this, the traffic has become very slow. At the same time, due to the high pressure of vehicles going towards Ghaziabad via Ghazipur, there is a severe jam on the roads. Vehicles are going towards Ghaziabad via Noida. Traffic police are in alert mode.
Also Read: Agnipath Protest: Indian Railways cancels 700 trains, How to check full List, reschedule timing; Detail Inside
People like us have trouble
Commuters complained of facing problems due to heavy traffic jams. Manish Kumar, a resident of Greater Noida West said, “Some organization is always trying to protest in Delhi, but common people like us have to pay for it. I got delayed in reaching the office today and many others like me also faced problems. Legal agencies need to find a permanent solution to this.
A user named Rajiv Sharma wrote on Twitter, 'Delhi-Meerut Expressway closed due to police barricades in Ghazipur. People are upset, we are burning fuel on the road by getting stuck in a jam on our way to the office and ask for help.' Neeraj Goyal wrote, 'Delhi Police is requested to remove the barricades on the way from Akshardham to Sarai Kale Kha during peak hours (7 am to 11 am). It took 1-2 hours to pass through these barricades. Lakhs of people are getting delayed because of these barricades.
At the same time, traffic officials said that efforts are being made to smooth the traffic at the earliest without compromising on safety. He said the traffic situation is expected to return to normal in an hour.
Avoid going on these routes
Delhi Traffic Police issued an advisory on social media at around 7.30 am on Monday, informing people about the closed roads and diversions of Central Delhi. It has been told in the advisory that the restrictions and diversions will be effective between 8 am and 12 noon. However, traffic police officials say the time may be extended if the protests continue for a long time, as of three days last week.
Traffic police said, between 8 am to 12 am, avoid taking lives on Motilal Nehru Marg, Akbar Road, Janpath and Man Singh Road. Movement on these roads will not be possible due to special traffic arrangements. Avoid Gol Methi Junction, Tughlaq Road Junction, Claridges Junction, Q-Point Junction, Sunhari Masjid Junction, Maulana Azad Road Junction and Man Singh Road Junction from 8 to 12 hrs. There will be heavy traffic on these roads.
Watch Video: