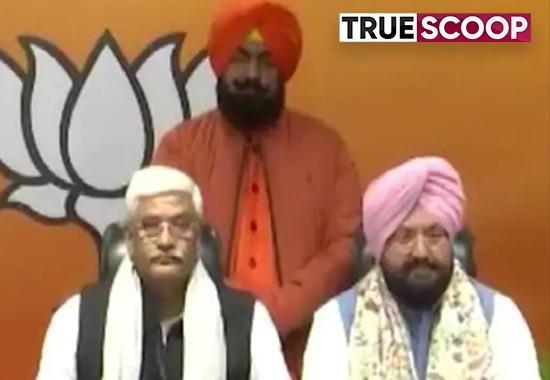 The Punjab Congress has suffered a major setback today. Congress MLA Fatehjung Singh Bajwa from Qadian in Gurdaspur and MLA Balwinder Singh Ladi from Shri Hargobindpur have joined BJP. Cricketer Dinesh Mongia and former Akali MLA Gurtej Singh Ghudiana also joined the BJP with him.
Both the Congress MLAs joined the BJP at the BJP office in Delhi. Fatehjung Bajwa is a well-known face. He was a contender to contest from Qadian in Gurdaspur.  Both the MLAs left the party due to conflict between the party members.
According to sources, it is expected that in the coming days few more MLAs might leave the Congress party ahead of Punjab elections 2022.
Also read: Punjab's Former Minister, Rana Gurmit Singh Sodhi joins BJP
Earlier, Rana Gurmit S Sodhi, MLA from Guru Har Sahai in Punjab joined BJP. Rana Gurmit Singh took this step as he was deeply hurt with bickering and in-fighting within the Punjab Congress.
He wrote on Twitter, "I cannot accept Punjab’s suffocation and helplessness! Congress party has put state’s security & communal harmony at stake.
With deep agony, I put forth my resignation from all posts & primary membership of Congress party with immediate effect."
(This is a developing story.)