RTI activist, Sanjay Sehgal came in contact with TrueScoop and revealed that a scam is going on in DAV University, Pathankot Road, Jalandhar. 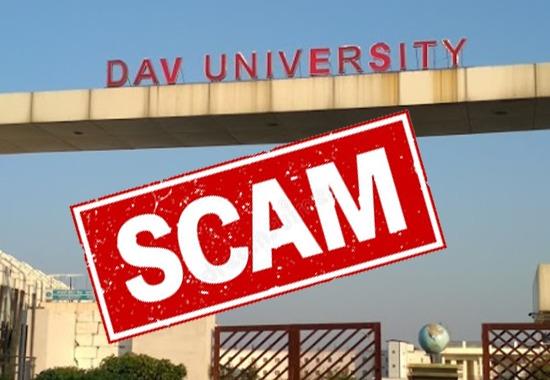 RTI activist, Sanjay Sehgal came in contact with TrueScoop and revealed that a scam is going on in DAV University, Pathankot Road, Jalandhar. He has also sent a letter to CM Bhagwant Mann, Delhi CM Arvind Kejriwal, and Chairman of Interim Advisory Committee, Raghav Chadha in regard to this matter and has requested them to carry out the investigation for the same.
In his letter, he mentioned that DAV University, Jalandhar is working against the rules and providing sub-standard education to the students. The university is working without NAAC (National Assessment and Accreditation Council) & ICAR (Indian Council of Agricultural Research) accreditation and authorization. He also revealed that the university is running agricultural courses which they can’t as they do not have accreditation from ICAR.
He further added that the university does not have sufficient land & infrastructure which is required to establish the Agricultural Science Degree Course & Research. The main point is that the higher committee of the university does not inform parents and students about the same while giving them admissions.
Another startling fact that he mentioned is that some non-teaching staff members do not have a valid degree/qualification related to their jobs."
He also stated that the university is playing with the future of young students who take admission in this field. These students fail to get jobs anywhere as the degree that they have got is from a non- ICAR University.
He added that the above information has been collected by him under RTI.  But the Public Information Officer failed to furnish the information on his RTI applications.
ALSO READ: The government is trying to weaken the RTI says, Sanjay Sehgal
In the end, he has requested the concerned authorities to take strict action against them to save the future of students studying there.
We tried to reach out to the Vice Chancellor of the university but she did not give any response to the call.