It’s for all the Bigg Boss fans who must be eager to know who will be seen in this season. The wait is finally over as here is the full Bigg Boss 16 Contestants list 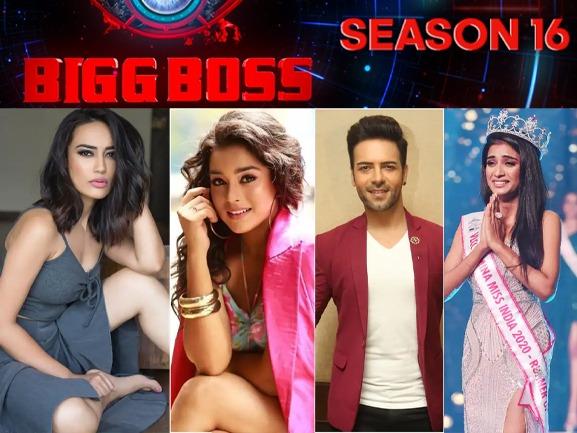 The famous reality show, Bigg Boss is all set to be back on the TV screens with its 16th season and the fans can’t keep calm to know which all stars will be seen in the house this time.

The promo of the show got aired on 11 September 2022 which revealed that the latest season has got a totally new twist in it. The tagline of this show “Iss Baar Bigg Boss khud khelenge,”

has left all its viewers perplexed. Without any doubt, this season will also be hosted by everyone’s favorite Salman Khan. According to the information received Bigg Boss 16 will air on Colors Tv on 1st October 2022. Just a few days before the show has to be started, its top 10 contestants have also been revealed by the makers.

Here is the list of the contestants who are ready to show their A game in the biggest TV reality show, Bigg Boss.

The Femina Miss India 2020 runner-up is a great example that hard work and dedication lead you to success in life.

She attained a lot of fame from her famous character Iccha in show evergreen show Uttaran.

She has greatly impressed the audience through her films and shows like Miley Jab Hum Tum, Koi Laut Ke Aaya Hai, etc.

She achieved a lot of fame through her show Imlie but later on went to quit the show.

She became the apple of everybody’s eye when she appeared on the show Guddan Tumse Na Ho Paega. Latest, she was seen in Khatron Ke Khiladi.

The actress who now enjoys the love of the Odia industry was first seen in Ace of Space 2.

She is known for her acting in various Telugu films and mythological serials.

She is one of the most loved TV actresses in India and enjoys a huge fan following. She was seen in Naagin where she surprised everyone with her outstanding acting skills.

He received massive love from the audience when he appeared in MTV Roadies and later on emerged as the winner of Bigg Boss Marathi S2.

The actor is loved by everyone for his stellar performances in shows like Ek Rishta Saajhedari Ka, Nagin, Hamari Devrani, etc.

The last season of Bigg Boss was won by Tejaswi Prakash. This win opened the door to a lot of opportunities for her. It would be interesting to see who will take home the trophy of this season.