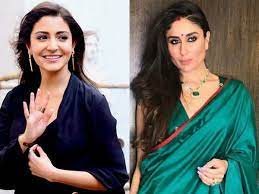 Birthdays are filled with surprises and affection for everyone, and for Anushka Sharma, who turned a year older today, it seems to be a happy day. Anushka Sharma turns 33 today. Wishes have been pouring in for Anushka on social media as she spends time on the IPL 2021 tour with Virat Kohli and daughter Vamika, and now Kareena Kapoor Khan has sent her love to the birthday girl. Kareena wished Anushka a Happy Birthday on her Instagram page. Kareena took to her Instagram story to wish Anushka on her wedding day with Virat and posted a stunning monochrome picture of her as a bride. She wrote, "Happy birthday to the trailblazing @anushkasharma." In the photo, Anushka is seen all dolled up as a bride for her wedding with Virat. The photo originally was shared by the cricketer on their 3rd anniversary. Kareena shared the same to send love to the PK actress who also embraced parenthood with Virat this year.

Meanwhile, Anushka is currently with Virat Kohli as he competes in the IPL 2021. Social media has been flooded with photos of her spending time with Royal Challengers Bangalore players during the bio bubble. In recent photos with Virat, fans have noticed her motherhood glow. When she and Virat welcomed their baby girl, Vamika, in January 2021, the PK actress celebrated motherhood. Since last evening, wishes have been pouring in for Anushka as she celebrates her one-year birthday. Her fans have taken to social media to wish her a happy birthday by posting pictures of her.