"Is this an unequivocal admission that BJP is the sole custodian of the Tiranga, a symbol of our national pride?” Said Amit Malviya in a tweet against the opposition over skipping the event 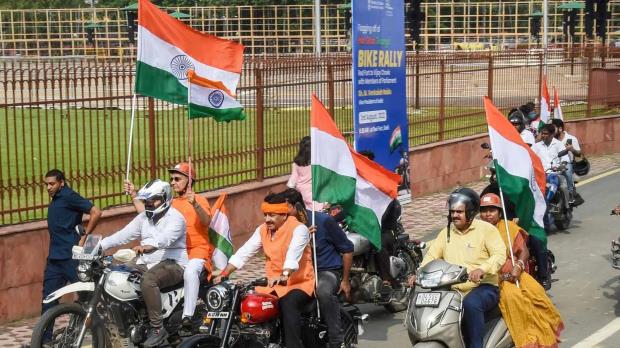 BJP IT Cell Chief Amit Malviya questioned the opposition MP’s absence in the Tiranga bike rally organized as a part of ‘Azaadi ka Amrit Mahotsav’.
In a tweet, Amit Malviya said, “this morning, MPs took out a Tiranga Bike Rally from the historic Red Fort in Delhi. Vice President flagged off the rally but no opposition MP chose to participate. Is this an unequivocal admission that BJP is the sole custodian of the Tiranga, a symbol of our national pride?”
The BJP had organized a Tiranga bike rally at the national capital to commemorate the sacrifices of freedom fighters, as India approaches to celebrate its 75th year of independence.
Several Ministers from BJP and MPs took part in the rally earlier today flagged off by Vice President M. Venkaiah Naidu.
Union Sports & IB Minister Anurag Thakur participated in the rally and commented about the event, "Many central ministers, MPs and young leaders came together, and started the bike rally from the historic Red Fort to give the message that 'we are paying our tribute to our freedom fighters and remembering them, and also to assure that in this ‘Azadi ka Amrit Mahotsav,’ we will work to maintain the unity and integrity of the nation, and enhance the glory of India."
Also Read; 'Setting new trends': PM Modi grilled over 'bizarre' wrong pronunciation of Sanskrit shloka; Watch
The ‘Har Ghar Tiranga’ bike rally is organized a day after the Ministry of Culture hosted a mega ‘Tiranga Utsav’ event on Tuesday as a part of ‘Azaadi ka Amrit Mahotsav.’
Union Home Minister Amit Shah appealed to the citizens to observe the ‘Har Ghar Tiranga’ campaign to tell the world how India has emerged from slumber and swiftly moving ahead to establish herself as a ‘great power’ under the leadership of Prime Minister Narendra Modi.
Whereas Congress on the other side has responded differently to the appeal of Prime Minister Narendra Modi to change their profile pictures with that of the national flag. The members of the grand old party have changed their profile pictures to Jawaharlal Nehru holding the national flag, including their Twitter handle with several other leaders following suit.
“The tricolour is in our hearts, it is in our veins as blood. On December 31, 1929, Pandit Nehru while hoisting the tricolour on the banks of river Ravi said, 'Now the tricolour has been hoisted, it should not be bowed',” the official Twitter handle of the Congress party posted in Hindi.