The BJP is likely to make the construction of the grand Ram temple in Ayodhya and 'Jai Shri Ram' the major issues in the next year's Assembly polls in five states, especially in Uttar Pradesh, where it is strengthening its connect with cadre vote bank and is targeting the main opposition -- Samajwadi Party (SP) and its chief Akhilesh Yadav. 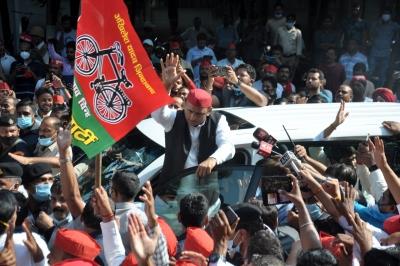 The BJP is likely to make the construction of the grand Ram temple in Ayodhya and 'Jai Shri Ram' the major issues in the next year's Assembly polls in five states, especially in Uttar Pradesh, where it is strengthening its connect with cadre vote bank and is targeting the main opposition -- Samajwadi Party (SP) and its chief Akhilesh Yadav.

Talking to IANS, a veteran BJP national leader said: "For us, Lord Shri Ram and the construction of a grand Ram temple in Ayodhya was never an election agenda, but an issue that once isolated us in Indian politics. It is necessary to tell the public about the achievements related to it."

Another Uttar Pradesh minister told IANS: "We must tell people that the Supreme Court's historic decision came during the tenure of Prime Minister Narendra Modi and the construction of the Ram temple during the tenure of Chief Minister Yogi Adityanath. We also celebrated a record breaking 'Deepotsav' this year. Along with this, it is also necessary to educate people about what happened in 1990 and what can happen if these people come to power again."

The BJP's political resolutions reflect its core agenda of promoting Hindutva from the speeches of Prime Minister Modi and Chief Minister Yogi Adityanath.

Prime Minister Narendra Modi while addressing the people during his Kedarnath tour on November 5, had mentioned about Ayodhya. He said: "Just two days ago, the whole world witnessed the celebration of 'Deepotsav' in Ayodhya. Can you imagine how beautiful our ancient cultural form would have been?"

Along with this, he also highlighted the rejuvenation of Kashi and the work of Baba Vishwanath Dham which is moving towards completion at a very fast pace.

Chief Minister Yogi Adityanath, while speaking at various programmes of Deepotsav, organized in Ayodhya, on November 3, claimed that no one can stop the construction of the Ram temple in Ayodhya and it will be ready for devotees by 2023.

Reminding people of the massacre of Kar Sevaks in 1990, he said, "What was happening in Ayodhya 31 years ago? On October 30 and November 2, 1990, Ram bhakts were fired in a barbaric manner. There was also lathi-charge. Chanting Jai Shri Ram slogan was considered a crime back then."

Targeting Akhilesh Yadav's family, he said: "Those who were firing on Ram Bhakts 31 years ago, now bow down before you. Today it seems like if you keep supporting our agenda, the Yadav family will soon become Kar Sevaks to please you."

Yogi also assured the people that apart from the Ram Temple, other temples of the state and the devotees of Lord Ram and Krishna, will also be taken care of by his government.

He said: "We will shower flowers on the devotees of Rama and Krishna and take care of all the temples in the state."

Criticising Akhilesh, Yogi said, "The Akhilesh Yadav government only spent money on graveyards in the state. But the BJP government is focusing on 500 pilgrimages including the Ram Janmabhoomi, Kashi Vishwanath and Naimisharanya Tirth in the state. Out of these, 300 works have been completed and work on another 200 is in progress."

Realising that SP is the main contender in the Uttar Pradesh polls, the BJP is leaving no stone unturned to highlight its achievements at the Centre and state before the public and is sticking to its core agenda of Hindutva to beat its opponents.