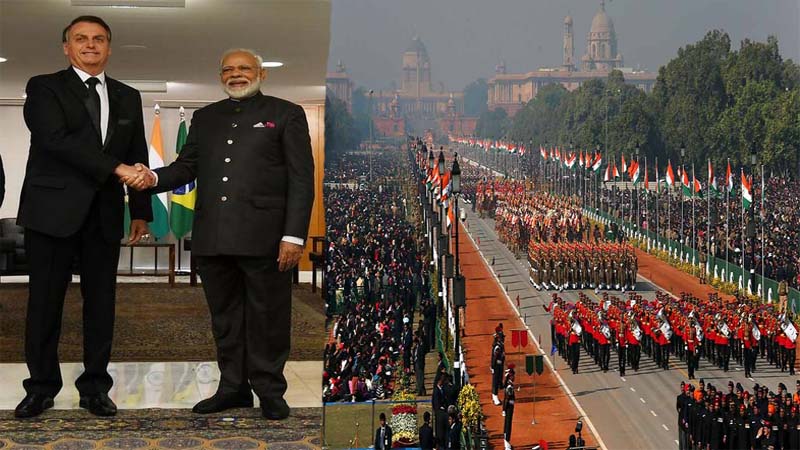 Bolsonaro's visit to India as Republic Day chief guest has given birth to controversy as activists raised questions on providing him with an invitation for the event by Prime Minister Narendra Modi. Last year, the two leaders held negotiations on the sidelines of big-ticket events such as G-20 and Brics summits.

India-Brazil bilateral trade stands at $7.57 billion for the year 2018. The two countries aim to increase it to $25 billion in next three-four years. Despite the government sees it as greater economic cooperation between India and Brazil, opposition's reaction to this collaboration is largely based on two key points-- sugarcane farming and Bolsonaro's controversial personality.

Brazil is a major competitor of India in global sugar market. It is a major sugarcane producer. Brazil has been seen increasing stakes against the support measures taken by the Indian government with has put sugarcane farmers of India in agrarian distress in recent years.

In 2019, Brazil successfully launched a campaign against India at the World Trade Organisation (WTO) claiming India was extending support to sugarcane farmers beyond the permissible limits under the WTO regulations.

However, the farmers in sugar-producing states and Left-linked associations have led campaign against the visit of Bolsonaro. The farmers point of argue is that the invitation to Bolsonaro is an insult to them as the Brazilian president wants the WTO to take measures that would endanger their livelihood.

Somehow, the vital objection to Bolsonaro's visit has been on account of his personal views. Bolsonaro has retired as a military man, and as a leader he is known by shades of misogyny and homophobia, and for targeting indigenous people.

Bolsonro had hit international headlines in 2014 for his sexist remark made in Brazil's parliament during a debate. Bolsonaro had told Brazil's opposition's Maria do Rosario, "I wouldn't rape you because you're not worthy of it."

Despite of the criticism he refused to apologise from all quarters. Later, Bolsonaro not only repeated his comment against Mria do Rosario but also added that he would not rape her because she was "ugly."

On another occasion, Bolsonaro's misogyny did not spare his own children. While delivering a speech in 2017, Bolsonaro said, "I have five children. Four are men, and then in a moment of weakness the fifth came out a girl."

Bolsonaro is also known for his homophobic views. In the year 2002, when the then Brazilian President Fernando Henrique Cardoso supported for gay rights including marriage, Bolsonaro had been quoted as saying, "I won’t fight against it nor discriminate. But if I see two men kissing each other on the street, I’ll beat them up."

In 2015, Bolsonaro courted another controversy in the middle of an international refugee crisis. He called the refugees as "scums of the earth".

Bolsonaro won the Brazilian national election in December 2018 with a thumping majority and assumed power in January 2019 expelling the leftist government. His rightist ideology is another reason for protest by some activists over him being the chief guest at the Republic Day Parade 2020.