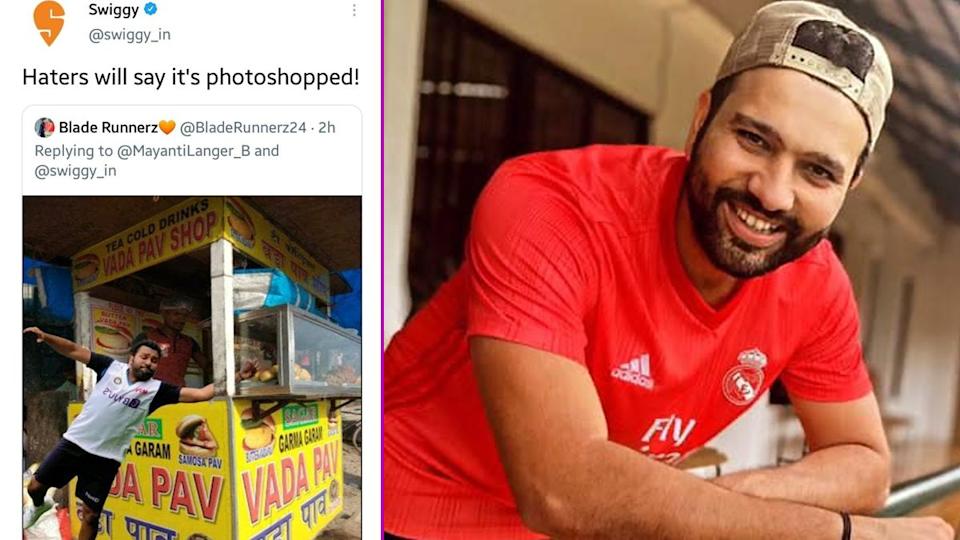 Rohit Sharma was trending on April 13 on Twitter along with the hashtags of ‘Boycott Swiggy.’ The food ordering and delivery app have been facing criticism on social media soon after it shared a Vada Pav meme on Mumbai Indian’s captain Rohit Sharma.

The meme was originally created by an IPL fan ahead of the Mumbai Indian vs Kolkata Knight Riders match. In the shared photograph, Rohit Sharma could be seen reaching out for food at a vada pav stall. Commenting on Hitman’s fitness Swiggy quoted the meme as, “Haters will say it's photoshopped”.  The tweet went viral and Rohit Sharma’s fan took the charge of the situation, resulting in Swiggy deleting the tweet. Fans criticized the food ordering app for disrespecting the national player.

The users took to Twitter and said, “Running Agendas On Social Media, Defaming National Players. This is disrespectful to a player who plays for India. We all should raise our voice for this Whether we are Dhoni fans or any other But he plays for our country. Please don’t support this.”

Also Read: Ambedkar Jayanti 2021: His principles and role in the upliftment of minorities

Another user wrote, “This app is insulting our Indian Matchwinner…Let’s leave Rohit, Insulting any person like this is completely wrong in my opinion. Never expected this type of thing from Swiggy. For looking funny, They are insulting someone!!!” The user urged people to use #BoycottSwiggy in every tweet.

After being heavily criticized by Rohit Sharma fans, Twitter issued a clarification on the matter. The tweet by Swiggy read, “A special message to the Hitman’s fans. We reposted a fan’s tweet in good humor. While the image was not created by us, we do admit it could’ve been worded better. It was not meant to offend anyone in the least. Needless to say, we’re always with the Paltan.”