Richa Chadha apparently mocked the Indian Army after responding through the statement of a top Army commander over the Army’s commitment to taking PoK back Author : Tushar Singh 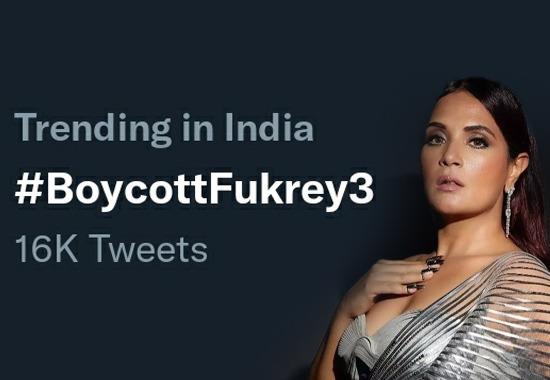 The tweet, however, has been deleted from the actor but has left behind a spark of controversy against the actress receiving comments from several renowned celebrities. Akshay Kumar, filmmaker Vivek Agnihotri, and BJP leader Paresh Rawal condemned the actress’ response to remarks from a top Army Commander.

The fans have also taken to Twitter to tender their protest against the actress’s comment by resorting to boycotting the upcoming sequel of the actress’ hit franchise of Fukrey which also stars her husband Ali Fazal.

Richa Chadha has remained in controversies earlier as well after she revolted against the move of banning Pakistani actors over the state-sponsored terror attacks in India, besides mocking Wagha Border to be the “greatest circus in India.”

The fans have been fuming against the actress’ statement and schooled the actress’ through shades of responses over her derogatory remarks.

Watch Some of the tweets here:

Hello #RichaChadha .. becoming an idol for fans that's sweets but !nsulting our BraveHeart #IndianArmy who sacrifices in Galwan for You And I that a shame of you.. You shud learn ur lesson now lets #BoycottFukrey #Bollywood #BoycottBollywood pic.twitter.com/fNeDNCVWFC

@RichaChadha it's a shame that you continue to live a luxurious life with our money, on our land, and yet you mock the protectors of this land. You have hurt Indians and we wont hesitate in reciprocating your hatred #boycottfukrey

#boycottfukrey#BoycottMamaEarth for having #RichaChadha as a brand ambassador. She always show her Pakistan love and hate for Indian army. Need strong boycott.

For those, who don’t know the standoff between India and China, close to the Line of Actual Control which lasted for months saw a deadly scuffle between the militaries of the two nations in which 20 of our brave soldiers were martyred.