#BoycottRakshaBandhanMovie trend has been doing rounds on Twitter and Akshay Kumar is being criticised by fans over his 'dual nature'. 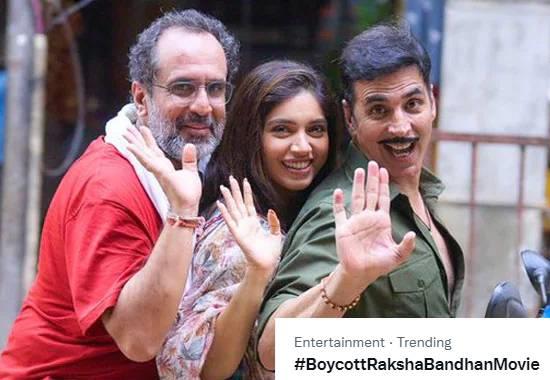 At a time when Bollywood is struggling to give blockbuster hits at the box office, multiple actors have been facing the wrath of fans on social media over their remarks on India and especially against Hindu gods. Now, Akshay Kumar's upcoming movie Raksha Bandhan has come under the scanner of social media. #BoycottRakshaBandhanMovie is been trending on top after an old video of Akshay Kumar criticizing the idea of Hindus offering milk and other things to their idols or deities went viral.
#BoycottRakshaBandhanMovie trend has been doing rounds on Twitter and Akshay Kumar is being criticised by fans over his 'dual nature'. Raksha Bandhan is Akshay Kumar's upcoming movie Directed by Anand L Rai which also features Bhumi Pednekar in the pivotal role. Akshay's Raksha Bandhan will be releasing on August 11 on the occasion of Raksha Bandhan festival. Interestingly, the film will directly clash with Bollywood actor Aamir Khan's much-awaited movie Laal Singh Chadha.
Aamir Khan too has been subject to criticism on social media and fans are unitedly trending to boycott Laal Singh Chadha as well. The call for boycott has been happening from the past two to three days. In fact, it has forced Aamir Khan to break his silence about the ongoing negative trend. In an interview with India Today, Aamir Khan said, "Yes, I feel sad. Also, I feel sad that some of the people who are saying this, in their heart, they believe that I am someone who doesn't like India."
"In their hearts they believe, but it is untrue. It is rather unfortunate that some people feel that way. That's not the case. Please don't boycott my film. Please watch my film," added Aamir Khan.
#BoycottRakshaBandhanMovie trending reason
Also Read: #BoycottPathan: Why Shahrukh Khan's upcoming movie is facing the ire of fans on social media?