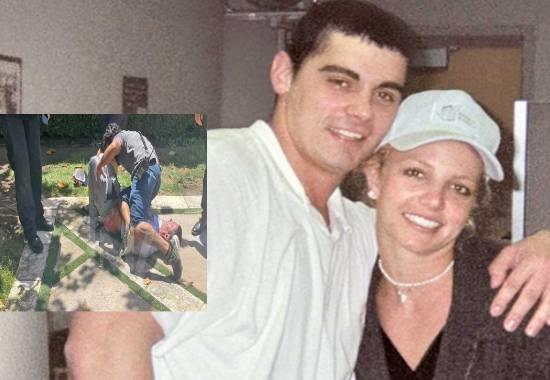 Hollywood Pop star Britney Spears on Thursday married her long-term boyfriend Sam Asghari in a close-knit ceremony in Los Angeles. Britney Spears-Sam Asghari marriage took place seven months after the Hollywood Popstar was freed of her conservatorship that had prevented her from getting married and having a baby. However, Britney's ex-husband Jason Alexander, gatecrashed the party and also live-streamed it on his social media account.
Britney Spears ex-husband crashing wedding viral video has been doing rounds on social media as Jason has been arrested for trespassing. As per TMZ report, Jason has been booked for trespassing, vandalism, and 2 other offenses related to his physical altercations with Britney's security.
Here's Britney Spears Jason Alexander trespassing viral video
Also Read: Britney Spears ties knot with longtime partner Sam Asghari

It is pertinent to mention here that Britney Spears and Jason Alexander had married in 2004 in the heat of the moment, however, their marriage was annulled 55 hours later. , Mathew Rosengart, Britney Spears' attorney, informed, "He has been detained handcuffed, and arrested for his disgusting criminal misconduct."
Britney Spears marriage
Coming back to Britney Spears marriage, the Hollywood Popstar met 28-year-old Asghari, an actor and personal trainer, in 2016 on the set of her song Slumber Party. Spears had shared in a radio interview in 2017 that they took nearly “five months” to reconnect after that.
There were around 60 guests, according to 'People' including Madonna, Selena Gomez, Drew Barrymore and Paris Hilton. Spears' sons with Kevin Federline, Sean and Jayden, did not attend the wedding, but wished the happy couple the best, according to a statement to 'People' from Federline's lawyer. Spears' father Jamie Spears, mother Lynn Spears and sister Jamie Lynn Spears were also not in attendance.