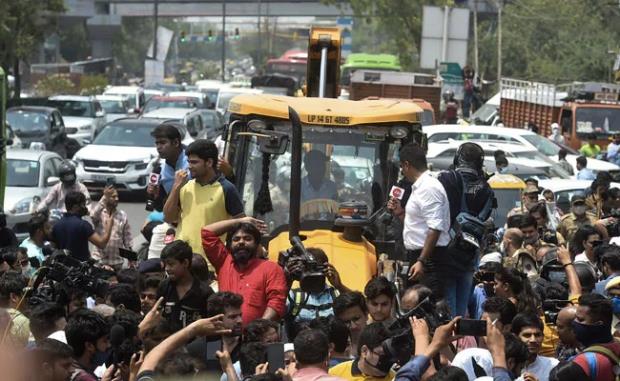 Bulldozer in Shaheen Bagh: The bulldozer of the Municipal Corporation, starting from Jahangirpuri in Delhi, reached Shaheen Bagh today against the encroachment in illegal constructions in the capital Delhi.
The exercise to remove the encroachment was started in Shaheen Bagh this morning amid heavy protests, but there was no need to run the bulldozer and the bulldozer returned without moving.
For this, a large number of police and paramilitary force personnel were deployed in the area. On getting information about this action, local MLA and Aam Aadmi Party (AAP) MLA Amanatullah Khan reached the spot and called this action wrong.
Amanatullah Khan said that there was a toilet in front of the mosque, which I got it removed with my own money. Wherever there is encroachment in the entire assembly, MCD people tell me, I will get it removed myself. They are spoiling the atmosphere by coming here, politicization is being done.
According to the information, on the demand of South Delhi Municipal Corporation (SDMC), Delhi Police today asked MCD to provide force to remove encroachments in the Shaheen Bagh area. Earlier, the Southern Corporation could not get the police force to act on the encroachment, due to which the action of the bulldozer was postponed till May 8.
Also Read: Illegal encroachment being manually removed at Shaheen Bagh in Delhi
LIVE UPDATES:-
Now the police force is also going from Shaheen Bagh.
Action has been stopped by MCD in Shaheen Bagh for the time being. The bulldozer returned without leaving amidst heavy protests
- Amanatullah Khan said that wherever MCD tells, I will remove it myself. Amid is trying to spoil the atmosphere
- Amanatullah Khan said that there is no encroachment in Shaheen Bagh, what was there has already been removed
Aam Aadmi Party leader and local MLA Amanatullah Khan reached Shaheen Bagh
Local people opposing the action on encroachment surrounded the bulldozer
- The bulldozer squad of MCD proceeded to act on encroachment
Police took the protesting women into custody and removed them from the spot
Local leaders and people sat in front of the bulldozer regarding the action of MCD.
- A large number of people gathered on the spot in the area
Bulldozer and the MCD squad have reached the spot
Rajpal, chairman of SDMC Central Zone Standing Committee, said that the municipal corporation will do its work. Our workers and officers are ready, and teams and bulldozers have been deployed. Wherever there are encroachments in Tughlakabad, Sangam Vihar, New Friends Colony or Shaheen Bagh, encroachments will be removed from there.
The bulldozer of the South Corporation has been continuously roaring against illegal construction and encroachment since May 4. So far, encroachment has been removed from Tughlakabad, Kalindi Kunj Main Road, Kalindi Kunj Marg etc. According to the corporation's plan, action will be taken against illegal construction in Shaheen Bagh on May 9.