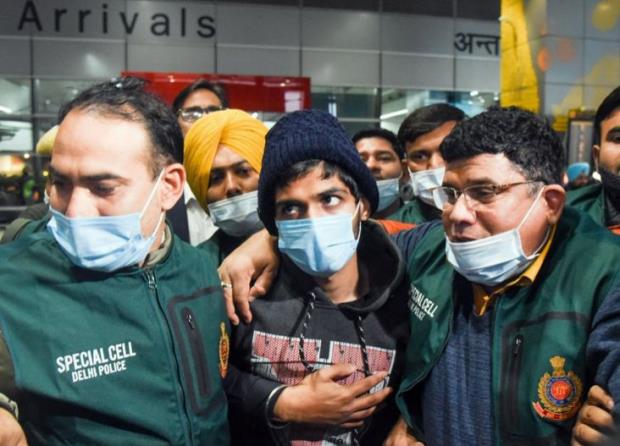 Neeraj Bishnoi, a young and promising computer science student, created an app to auction Muslim women and Journalists.
The issue was brought to light on January 1 when many Muslim women were put up for 'auction' on the disgusting app. Their images, many of which had been doctored, have been featured in the GitHub app.
"The term Bulli Bai itself seems disrespectful and the content of this website/portal is clearly aimed at insulting Muslim women as the derogatory term 'Bulli' is used exclusively for Muslim women," read the complaint.
The app has no relation to Sikhs, according to police, but the accused reportedly made it seem as though it was related to Khalistani organizations.
B.Tech second-year student Neeraj Bishnoi is currently in police custody. The police have remanded his custody for seven days.
Neeraj made shocking revelations during his first interrogation. He said that he had no regrets for what he did. He thinks that he did right. On being asked about the reason for doing so, Neeraj said that he was upset with the political stand and reports of some journalists. With this app, he wanted to teach a lesson to such journalists.
Also read: Who is Shweta Singh? Know all about 18-year-old Bulli Bai row mastermind
Bishnoi will be presented in Delhi court on Thursday night. Bishnaoi’s bank account is being seized by the police. Bishnoi told the police that he created the Bulli Bai app on Gift Hub apart from the Twitter handle @bullibai_. Apart from this, he had also made some other handles.
Neeraj Bishnoi's father stated that his son is innocent and he has no connection with this case. Neeraj always stays busy with his laptop as he is a computer science student.
Earlier, Vishal Jha and Shweta have been arrested in this case.