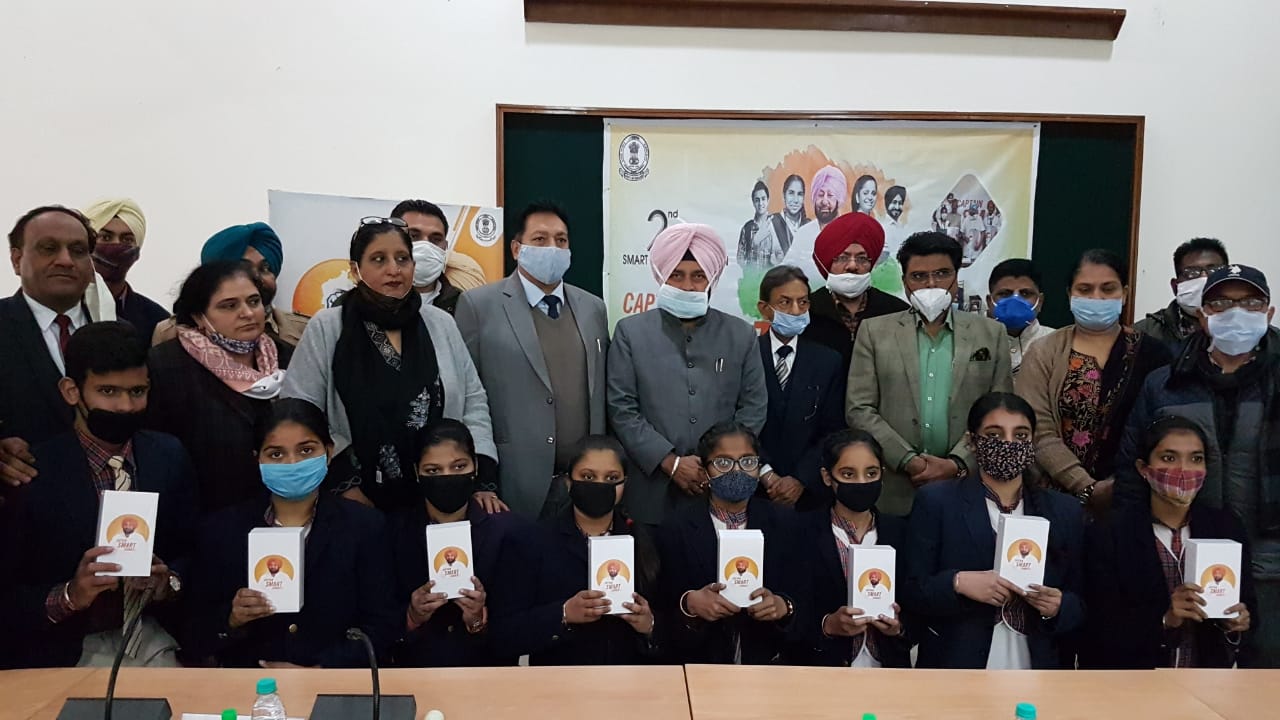 As many as 6966 students of 10+2 of 42 Government Senior Secondary Schools of Patiala district, today, got smartphones under the second phase of Punjab Smart Connect scheme. Earlier, 3104 students of the district, were benefitted with smartphones, in first phase, said Cabinet Minister for Forests, Printing and Stationary and Social Empowerment, Sadhu Singh Dharamsot.

Dharamsot who was here to kickstart the second phase of "Punjab Smart Connect" said that Education is the pivot around which the prosperity of any society revolves by further adding that it seems the key point behind the  ideology of the Punjab Chief Minister, Captain Amarinder Singh, who has not only promised to focus on the qualitative improvement in education in his poll manifesto in 2017 but has prepared a roadmap to give a concrete shape to his vision at the ground level. Under his visionary stewardship, the Punjab has emerged as a pioneer state in the country, which has succeeded in bringing in revolutionary qualitative improvement in school education during the past three years, he further added.

Fulfilling the pre-poll promise, the Punjab Government under "Captain Smart Connect" scheme is providing smartphones to all the +2 students studying in the government schools.

While lauding the commendable dedicated efforts put in by the education department especially the teachers during to translate the vision of the Chief Minister, Captain Amarinder Singh into reality at the ground zero level, Mr. Dharamsot said that the Punjab had emerged as pioneer state in ensuring optimum utilization of latest information technology apps to provide quality education to the students during the unprecedented pandemic COVID-19.

“With a view to facilitating the students belonging to the underprivileged section of the society to have access to the latest technology to avail the benefits of digital education, the Punjab Government has started providing Smart Phones equipped with pre-loaded applications related to E.content of the syllabus",  further said Forest and Social Empowerment Minister Punjab while exhorting the students to make the judicious use of the Smart Phones to tap the educational and employment avenues for shaping their career in a better way.

Enumerating various steps taken by the Punjab Government to revamp the school education, he said that abundant funds had been provided for infrastructural development in the schools.

“The Punjab is the first state in the country to start pre-primary classes in government schools three years ago. "Khed Mahals" for the tiny tots had been established by providing grants. The process to recruit as many as 8393 pre-primary teachers had also been started and to fulfill the long pending demand of the EGS, Education Volunteers, the relaxations in age and TET had also been given to the eligible candidates to tap the opportunity of entering into government service”, he added.

The government schools have been converted into  smart schools, outsmarting private schools in Board Exam results consecutively for the second year, increase in enrollment ,  beating the best in ensuring optimum utilization of latest digital applications to provide education facilities via TV/ Radio channels, Youtube, WhatsApp. Besides, the tech savvy school teachers have developed a unique "Punjab Educare App" to facilitate" Online Education' during the pandemic COVID-19.

There would be no exaggeration in terming the "online education" facility being provided by the Punjab Education Department during the closure of schools for the past six months as the best in the country. The lakhs of students are taking part in the online quizzes, ‘Vidayak Muqable’ to commemorate the 400th birth anniversary of Sri Guru Teg Bahadur ji, bi-monthly examinations and tests under Punjab Achievement Survey. Recently, the school teachers have interacted with parents of more than 20 lakh students during the week long virtual PTM.